Watch How a BMW Art Car Is Made

Over the years BMW created 17 art car projects starting with the 1975 3.0 CSL made by Alexander Calder. Even though this is not an official BMW art car yet, it will be joining the exclusive club later this year.
1 photo
This F30 3 Series is the work of art of one Andy Reiben, a Czech artist that is currently representing the international portfolio of BUYFEEL. He accepted the invitation of DyCom Group, a BMW Dealership in Karlovy Vary, the Czech Republic, to create a masterful and truly unique BMW.

He picked the F30 3 Series for its aggressive looks and character lines. Although it wasn't easy, the artist admitted he is quite pleased with the way things turned out. Talking about what the car's new design means and why it's named Fluidum, Andy felt he had to explain himself.

"I wanted to abstractly express passion and dynamism and therefore each part of the body is different and tells a story. On the front hood there is the birth and taming of the power, right and left sides express the balance of power, day and night; the rear part symbolizes resistance and the roof sinuosity and barriers on most routes. Triple line across the whole car on one hand indicates series designation of the original vehicle and on the other the clenched claws as if you wanted to stop the beast that tries to escape," said the Czech artist.

When the car will be added to the official BMW Art Car Collection later this spring, Andy Reiben will be joining the likes of Andy Warhol, David Hockney, Jenny Holzer, Frank Stella, Jeff Koons, Robert Rauschenberg or Roy Lichtenstein, all of which created special BMWs over the last 38 years. 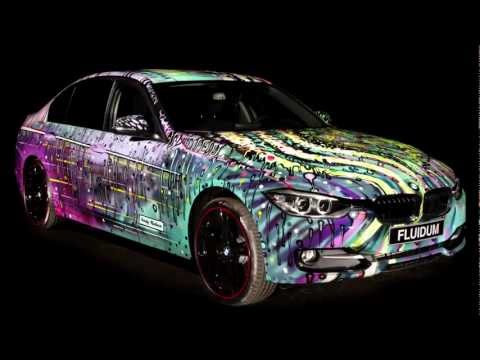