EV fires are rare, despite media coverage turning them into breaking news every time. Even so, having your car burning out of the blue is terrifying. It’s somehow better when the vehicle is not yours, like this test-drive i3 Sedan from a BMW dealership in China.
6 photos

Although the BMW i3 name might sound familiar, the car in the video below has nothing to do with the city car sold in Europe and the U.S. between 2013 and 2021. It’s basically an electric version of the BMW 3 Series which is only available in China, where it competes with the hugely popular Tesla Model 3. Launched in March this year, the electric bimmer might have difficulty cracking the notoriously-tough Chinese EV market, especially after this fire video went viral.

According to Chinese media, the BMW electric sedan caught fire during a customer test drive in the city of Zhengzhou in Central China’s Henan province. The fire started while the vehicle was in motion. The two people in the car pulled over and got out immediately as they sensed the characteristic smell. They found the fire was coming from under the vehicle in the rear section. Still, there was no burst or explosion, typical of Li-Ion battery fires.

On the downside, the bewildered customer kept streaming the fire on social media for more than 10 minutes, a massive blow to BMW’s EV ambitions in China. The news is now around the world, and although EVs catching fire is nothing new, we suspect the Chinese customers would be more sensitive to this story.

What’s interesting is that the flames don’t seem to extend to the rest of the vehicle during the entire video, which deepens the fire mystery. Even more interesting is that after 11 minutes, the first cars arriving at the scene were from the BMW dealership, not first responders. No fire extinguisher was available in the car, so all they could do was watch the car burning. And, of course, stream the whole thing.

The BMW i3 Sedan only started deliveries in June, and around 1,613 units were reportedly delivered. This puts it astray from its intended purpose to be a Tesla killer, considering that the American sedan sold 26,000 units in June. According to CnEVPost.com, the bimmer is a hard sale, with dealer targets impossible to meet. 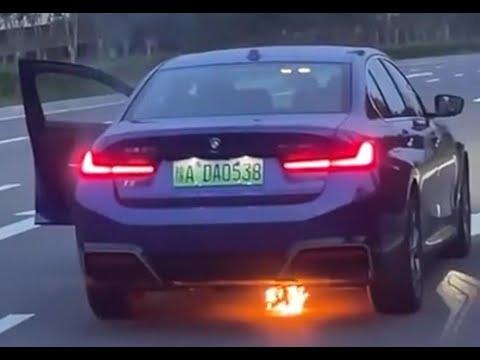