1 Check Out an AMG Burnouts and Drag Racing Compendium

5 Brabus 850 SL is The Fastest Roadster on The Planet
Car video reviews:
Up Next

Back in 2010 we had the immense pleasure of visiting the Brabus headquarters in Bottrop for a few days, which also proved enough time for us to drive what at the time was the fastest and most powerful sedan on the planet: the Brabus E V12.
1 photo
Based on the non-facelift version of the Mercedes-Benz E-Class (W212), this dark leviathan was upgraded by the nutters from Brabus to no longer sport a “puny” six or eight-cylinder engine, but a mighty twin-turbocharged V12.

Sporting a displacement of 6.3 liters, Mahle pistons, a titanium crankshaft and a pair of oversized turbochargers that feed air through no less than four intercoolers, the V12 under the hood of this downright scary sedan develops 800 hp and an asphalt-wrinkling 1420 (1047 lb ft) of torque.

Paired with a reinforced 5G-Tronic automatic transmission that used to reside in a Maybach and sent exclusively to the rear wheels, the gargantuan torque is electronically-limited to 1100 Nm (811 lb ft) in order to preserve both the drivetrain and the rear tires for as long as possible.

Strictly number-speaking, the Brabus E V12 of this generation can hit 100 km/h (62 mph) from a dig in just 3.7 seconds, while the model's top speed is electronically-limited to 370 km/h (230 mph). For the curious, the aforementioned numbers can vary depending on the final ratio and tires used.

Getting back to the simply ludicrous uber-sedan, YouTube user and car-spotter Gumbal recently ran into such a beast at an amateur drag racing event, where the car showed its muscle against a McLaren MP4-12C, a Mercedes-Benz SLR McLaren and others. Enjoy the video! 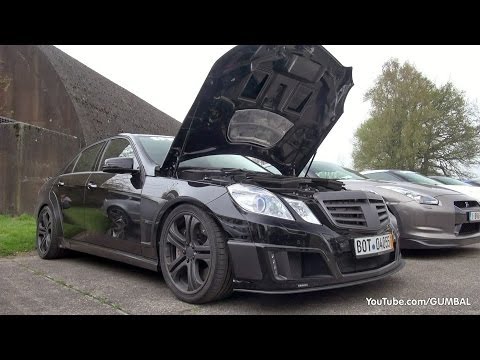