5 Boston Dynamics Robots Can Now Run Down the Road and Up the Stairs
Car video reviews:
Coverstory

Sometimes we can’t help but wonder if Boston Dynamics is building robots with the sole purpose of creeping everybody out. We’ve seen by now strangely shaped robots getting beaten and recovering, stacking boxes, and even doing a bit of parkour.
4 photos

But until Tuesday, April 16, we’ve been spared the horror of watching robots marching in formation, heading toward an increasingly strange future.

That changed when on the company’s Youtube channel a new video was uploaded. It shows not one, not two, but a total of ten SpotMini robots do something we’ve never seen coming: haul a truck.

In one corner of the Boston Dynamics parking lot, on a one-degree uphill slope, the robots were attached to a delivery truck – branded Boston Dynamics – in pairs of two, like dogs on a sleigh, and made to march in front of a camera.

In the eerie silence of the tree-bordered parking lot, the sound of metal steps strangely similar to that of an army marching is heard even before the eye detects motion. Then the first pair appears from the left of the image, complete with proud, metal heads attached. The two appear to be the brains of the formation.

Behind them, four more pairs follow suit, acting as the muscle of the group and marching behind the Alpha robots. No heads were provide for the rest of the pack.

Boston Dynamics does not say how much the truck weighs, but does insist that the machine has been put in neutral before the stunt was filmed.

What you can see in the video below is just one of the many applications Boston Dynamics has in mind for the SpotMini. The robot, currently in production, is to be sold to interested parties, so don’t be surprised if sooner or later one pops up next door, doing God knows what. 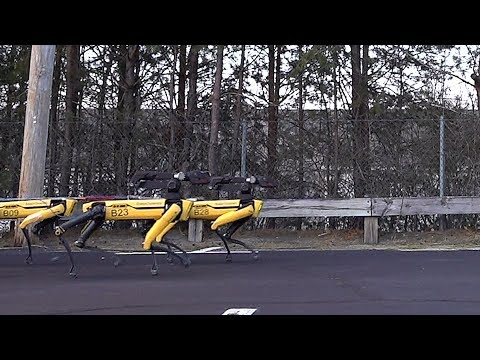