1 Watch the 2022 Kia EV6 Go Through the Moose Test, It Did Surprisingly Well

3 Video: 2002 Renault Avantime Chic-Looking Minivan Is Too Comfy To Pass the Moose Test

5 Old Mercedes A-Class on Cheap Tires Beats the New S-Class in the Dreaded Moose Test
Car video reviews:
Up Next

Polestar Ready to Kick off Its 2030 Climate-Neutral Car Project, Taskforce Raring To Go

A school bus is probably the last thing you could imagine taking the famous moose test. And yet it happened, and the results will blow your mind.
6 photos

The moose test, despite its peculiar name, is a basic evading maneuver that every driver has to get right if he wants to stay alive on the road. Before the time of electronic stability control systems, this sudden change of direction was almost sure to send the car into an uncontrollable spin. Even today, a moose test is used to demonstrate a car’s ability to sustain sudden changes of direction without getting out of the road, preferably.

But not every car performs the same in a moose test, and even the more sports-oriented cars embarrass themselves once in a while. A low center of gravity certainly helps, and this is why electric cars ace through the test. On the other end of the scale, you would have trucks and busses, which are expected to behave more like an ocean liner when turning.

Well, not quite, as the current regulations mandate that even buses must be able to keep it safe on the road. That’s precisely why bus manufacturers are required to take a moose test, or a “double lane change handling test,” as it is called in the U.S.

The electric truck and bus manufacturer Motiv Power Systems has performed such a test on its E-450 chassis medium-duty school bus, on the grounds of the Transportation Research Center. The purpose was to demonstrate how the computer-controlled braking of individual wheels helps the driver maintain control in critical or hazardous driving conditions.

Surprisingly, the test did not end in total disaster for the bus and the driver, showing that electronic stability control systems have come a long way on the road to safety. Although the video below is edited, it looks like the bus maintains its steady course during the double lane-changing maneuver. It is not the same as a full-blown moose test, as the angle of turning is wider, but it is still impressive to watch the medium-duty buss remaining stable throughout the test.

According to Motiv Power Systems, “this is the first medium-duty class 4 electric vehicle (EV) to pass this type of validation, providing added safety to drivers and passengers of the many all-electric trucks and buses built using the Motiv EPIC4, including school buses.” The new ESC system will be available on the Ford F-59 commercial platform starting next year. 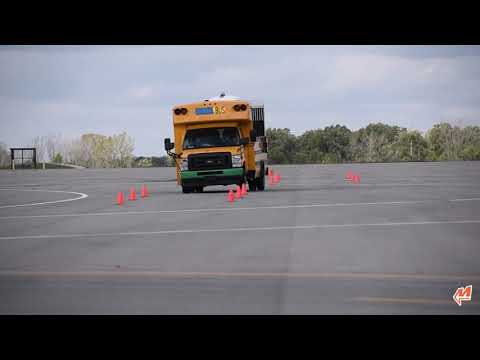