2 Young Tesla Driver Was Harassed and Chased by Truck Owners, 911 Refused To Help

5 Tesla Model 3 Is Destined To Be the Next NYPD's Patrol Car of Choice
Car video reviews:
Coverstory

Tesla Autopilot has been criticized for its lack of safety, especially after several high-profile crashes involving police vehicles. But the truth is that Teslas have been the innocent victim in many other accidents. Caught on camera, we have a police truck hitting a tesla Model S Plaid.
8 photos

Every crash involving a Tesla makes headlines in the media, sometimes attracting unnecessary criticism for its Autopilot system safety. Several of those crashes involved police vehicles, and NHTSA has opened an investigation to look into the matter. But things can also happen the other way around, with Teslas being hit by Police vehicles.

We’re not sure if this will get as much attention as a Police car hit by a Tesla, though it should. After all, I was taught years ago that a dog biting a man is not news; a man biting a dog is news. Well, here’s your bitten dog, professor! Thanks to Tesla’s integrated cameras, we can see in the video below that the Tesla driver (or the car) had no role in this crash.

The Model S Plaid is driving down a highway in Mexico when a police truck approaches from behind. Although it had the warning lights on, the sirens were off at the time. As the traffic slows down in front of the Tesla, its driver has little space to maneuver to make way for the police. The officer behind the wheel fails to acknowledge the change in traffic speed and hits the Tesla from behind.

He probably intended to change lanes to overtake the Tesla, and for that, he looked into the side mirror and checked the blind spot. Unfortunately, the Tesla slowed down at that point, and the police officer had little time to react. Fortunately, nobody was hurt, and the officer took full responsibility for the rear-end crash, but that’s not the end.

The Model S Plaid driver has waited for a long time to get his car. He is likely facing many months without the car while waiting for it to be fixed. Tesla repairs are notoriously lengthy, especially as Tesla prioritizes parts for new car builds. This leaves car owners high and dry when they need replacement parts for repairs. 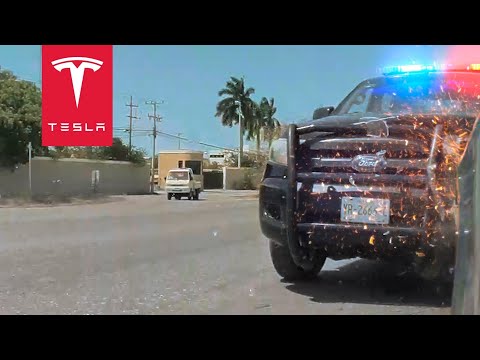