2 How to Turn your White SLK into a Black One

3 C63 AMG Burns Like a Marshmallow Because of a Switzer GTR P800
Car video reviews:
Up Next

We don't always see a classic and rather rare Mercedes getting put through the paces in an organized motorsport event, such as a pretty demanding hill climb, but, when we do, we make sure we share our find with our readers.
1 photo
Although a 500 SLC, even after getting most of its V8 engine bits tickled by Vaeth, is not quite the snappiest little car you would normally use for a hill climb race, even the not-exactly-hardcore Bergrenne Hillclimb Reitnau in Germany, our protagonist looks almost as home on those hairpins.

Sure, we're talking about a 500 SLC, which weighs almost two metric tons and is almost as large as a modern E-Class, but with around 300 horsepower on tap from the big V8, it doesn't feel short of breath.

In fact, it even looks (and especially sounds) as if its taking a casual Sunday stroll on a mountain road in the summer, not being put through a time-attack competition against the other cars that are usually found at these types of races (read: usually turbocharged rear or all wheel drive beasts with ginormous rear wings a full-on rollcage).

The Mercedes 500 SLC by Vaeth has nothing in common with these cars, but that doesn't mean it couldn't give them a run for their money, even on a snake-like mountain road. 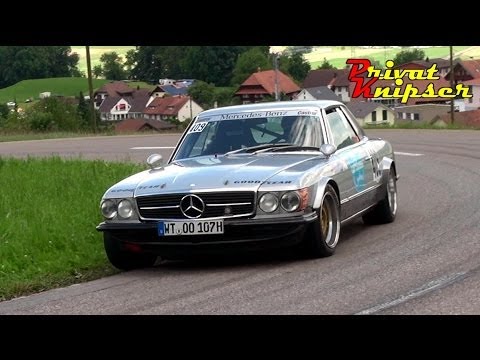