5 Tesla Motors Is Leaving Singapore
Up Next

Mihnea Radu
We don't exactly know everything that's going on in the automotive world, but we're pretty sure there are fewer VW Golfs that have spontaneously caught fire than there are Ferraris and Lambos, even though the Germans outnumber them by a hundreds and thousands.
1 photo
No matter what Audi or Porsche tries to do to make supercars safer and more civilized, it's still in their nature to spontaneously catch fire and cause a spectacle.

This one, a very lovely shade of Lamborghini Murcielago orange, just crashed into a light post somewhere in Asia. The two videos below show how over a period of about three minutes, the front end slowly catches fire. There's obviously some fuel on the ground and sparks may have appeared from the light post or the body of the car scraping the ground while being dragged.

Both the police and the towing companies stand there, watching and doing nothing with their hands in their pockets. From the heavy use of English in signs and the fact that the patrol car has "Police" written all over it, we'd say this incident took place in Singapore. Maybe somebody from the area can confirm this. 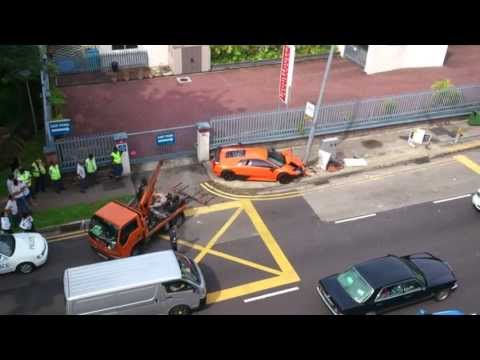