1 More Videos of the Amazing Flyboard Air in Action

3 It Takes $5,850 to Levitate On Water with the New Hoverboard
Car video reviews:
Up Next

For about three years now, a Frenchman by the name of Franky Zapata has been trying to prove the world that his personal air vehicle is a viable tech. Called by the media hoverboard, or jetpack, the technology was successfully put to the test twice this year.
6 photos

During the Bastille Day celebrations in mid-July, Zapata demonstrated its flyer, called Flyboard, in front of Parisiens. He committed then to take his contraption and fly it over the English Channel, from France to the UK, in one fell swoop.

This Sunday, he did.

Zapata made the first attempt to fly over the Channel on July 25 but stopped halfway through after missing a landing platform on which he was supposed to refuel. Not the same happened the second time.

Having departed from the French town of Sangatte at 08:15 CEST on August 4, Zapata traveled the 36 km (22 miles) distance to Saint Margaret's Bay in 22 minutes, stopping once midway to refuel.

During his trip, the Frenchmen and his device reached speeds of 202 kph (125 mph), according to Euronews.

The Flyboard Air used by the inventor for this stunt is powered by four turbojet engines, and can be used in untethered flight. The Flyboard Air entered the Guinness Book of World Records in April 2016 for farthest flight by hoverboard, after flying for a distance of 2.2 km (1.4 miles).

This weekend's achievement shatters that record, but it's unclear at this point whether Guinness officials were on site.

Since no one has tried to cross the Channel this way before, the Zapata name is sure to be forever mentioned in the history books.

It's unclear what Zapata's plans for the Flyboard are, but another thing is certain: the inventor is also working on a flying car, a machine he says is now waiting for authorization from French watchdogs before being released. 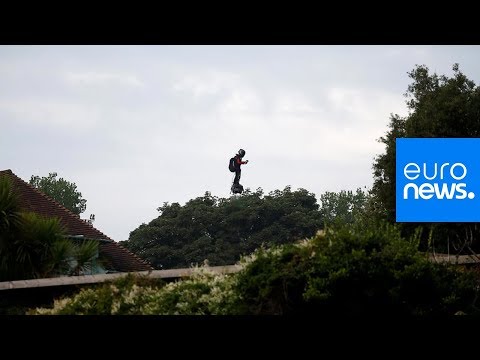