SUVs find themselves at the receiving end of plenty of flak, and that's because people (the fewer and fewer among us who don't already own one, that is) tend to consider them rather fake: they pose as these capable off-roaders when in fact they are little more than glorified family cars. Two-box, high-riding minivans, you might say.
7 photos

Well, that may apply to the host of crossovers that seem to be coming at us from all sides, but that doesn't mean there are no serious vehicles left of this genre. Yes, most of the models making up the segment nowadays are small crossovers with a unibody architecture and, in many cases, two-wheel-drive, yet anyone looking for something a bit more serious still has a few options to choose from, though their number is declining.

Look to the full-size SUV segment, though, and you're more likely than not to find a traditional body-on-frame vehicle, particularly if you browse through the U.S.-made section of the market. The Chevrolet Suburban, the GMC Yukon, the Cadillac Escalade, the new Jeep Wagoneer, and the Ford Expedition alike share a commonality: they're all built on more or less modified chassis of a truck.

Funnily enough, despite their robust nature, these SUVs don't make any effort to hide their family car nature (after all, who else needs three rows of seats and plenty of room in the trunk?). These are models with nothing to prove, so they have the confidence needed to look you in the eye and say, "yes, they mostly use me to go to soccer practice, so what? Have you got a problem with that?"

However, unlike some of their softer counterparts, these SUVs never forget their tough pickup truck roots, so they are always ready to perform whenever called upon. The stunt pulled by the Ford Expedition in the video below is indeed worthy of a commercial - not so much because it was such a difficult task but because it looks very impressive.

A full-size SUV is usually the vehicle that dwarves those around it with its size, but in this case, the Expedition definitely played the role of David. It's hard not to when the Goliath is a FedEx tractor-trailer unit (not technically an 18-wheeler, but just as big), but like the character in the Biblical story, the Ford was not at all impressed by the size gap.

Instead, the SUV took full advantage of the fact it had all four of its wheels on solid asphalt and made short work of pulling the semi and its trailed back on the pavement after the latter had got stuck in the soft mud (and seemingly dug a hole while trying to get out). Impressive, yes, but special praise should go to that chain. It's hard to imagine the tensile force it experienced during this maneuver, and it's horrible to imagine what would have happened if it had snapped.

However, all's well when ends well, though we still have one question we'd like answered: how did the driver of that truck manage to get in that situation? Did he try to get as close to the log cabin as possible (the video description says they were delivering furniture there), or was he trying to turn the rig around and found out it was a bad idea the hard way? Regardless, I bet he was glad there was a capable SUV around and someone willing (and able) to use it. 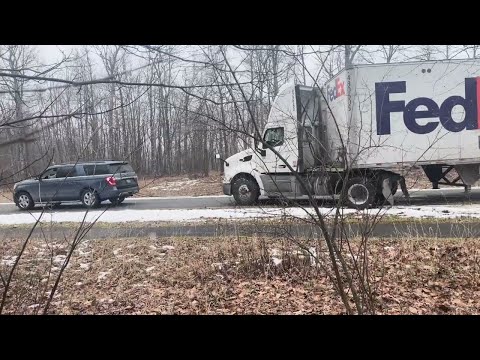