Dassault has recently released video footage of a mission conducted back in January that involved a Falcon 8X ultra-long-range business jet. The video shows the aircraft skillfully zipping through the narrow Star Wars Canyon, proving that it can perform the most demanding tasks.
8 photos

Located in the Death Valley National Park, Star Wars Canyon (or Rainbow Canyon as some call it) is one of the most well-known training areas for low-level tactical fighters. It’s a Mecca for aviation enthusiasts who want to see military jets zip through the narrow canyon.

However, military aircraft were banned from flying lower than 1,500 ft (460 meters) through Star Wars Canyon following a deadly crash involving a Navy Super Hornet fighter back in 2019. Now, several years later, we’re seeing the place roar to life again as the sounds of the Falcon 8X filled up the valley.

As one might guess, this was not a typical business jet mission. The pilots tested the maneuverability and agility of the 8X, which performed similarly to a smaller fighter aircraft. Although its performance was incredible, it does not come as a surprise since the business jet is fitted with a Digital Flight Control System derived from Dassault’s renowned Rafale fighter.

This technology increases not only safety but also passenger comfort. It also comes with the FalconEye combined vision system, which offers increased situational awareness to flight crews in challenging weather conditions.

While developing the 8X, Dassault revised all essential elements, adapting and optimizing them into an integrated airframe. It also redesigned the wings’ architecture and the winglets to further reduce drag and increase efficiency.

Speaking of efficiency, the aircraft can reach a maximum speed of Mach 0.9 and fly at 51,000 ft (15,545 meters) altitudes thanks to its three Pratt & Whitney Canada PW307D engines. The Falcon 8X has a range of 7,423 miles (11,945 km), which means it is capable of nonstop flights between New York and Beijing or London and Singapore.

The jet’s performance isn’t the only thing that makes it stand out – the aircraft provides maximum comfort to the passengers as well. Its generous cabin boasts an innovative air filtration system and enhanced sound-proofing technology, which makes it the quietest cabin in the industry.

The 8X is also tech-packed. Even over oceans, the cabin provides high-speed connectivity and internet access. Passengers can control the lighting, temperature, and window shades by using the side-ledge controls for a customized in-flight experience.

You can watch the business jet show off its capabilities through Star Wars Canyon in the clip down below. 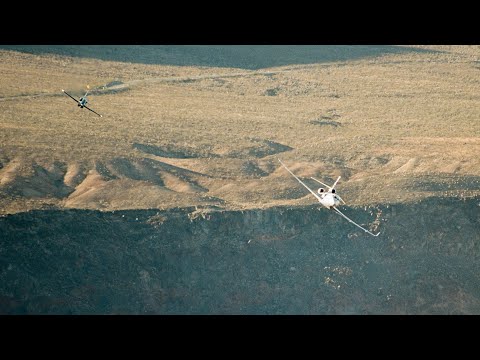