3 Mansory Porsche Panamera Turbo Is Something Else!

Some people watch YouTube videos on how to turn a foil into an aluminum ball. But we're more in tune with auto body repair. After all, a metal ball is pointless, but a fixed Panamera... well that's still a Porsche.
2 photos

By now you guys already know the drill. Arthur, the Russian mechanic, gets a wrecked car bought at auction and starts bringing it back to life with his trusty hammers. Oh, and all those comments we got about him not being Russian might be true since the license plates on the walls of his shop are from Lithuania.

But for the sake of simplicity, we're still going to call him a "Russian mechanic." The right is so much better than "Lithuanian mechanic," don't you think?

Anyway, the damage isn't that bad, mainly concentrated on the front left area. However, the crash pushed in the bodywork through the firewall in the footwell. The suspension was probably replaced before Arthur even got to work on the car.

The first thing he does is to strip off the damaged panels and inspect the car. The headlights are held in with just one screw, reminding us of a story from a few years back where Porsche Cayenne/Panamera headlights were being stolen and used to grow marijuana.

It seems that Porsches are like ogres and onions: they have layers. The mechanic has to strip off two layers of sheet metal before he can hammer out the firewall. Using leathers to measure the body is crucial as the front door was not closing previously due to misalignment.

After that, a new door is added to the car, and the donor fender is hammered back into shape. After returning from paint, the Panamera's interior bits are sprayed with an anti-corrosive substance.

And there you have it, a cool-looking Panamera facelift is back on the road and ready to look cool. The repair took eight days, split between bodywork and paint. 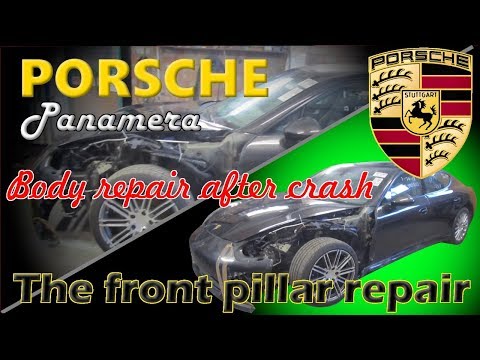