Watch a BMW X5 With Serious Rear Damage Get Repaired

Modern cars are like appliances - if they sustain enough damage, you might as well throw them away. But those American wrecks usually end up in Russia if they belong to the BMW or Mercedes family.
3 photos

SUVs are especially popular right now, but a brand new BMW X5 can easily cost $150,000. So what do you do if you've only got a tenth of that or even less? You get yourself a nice wrecked E70.

The E70 went out of production in 2013, but it's still recognizable as a luxury SUV, having that iconic BMW bruiser look. Also, in 2019, the xDrive35d diesel engine variant of the X5 was made available for sale in Canada and the United States, and that's a real fuel-sipper.

A big body that's difficult to slow down and the keen driving style of a BMW owner means many X5 end up suffering some kind of damage, but this one is different. Somebody else crashed into its hindquarters, resulting in structural damage that ate into the trunk.

Our favorite Russian mechanic starts his usual work by stripping the car. First, he removes the rear window and trunk lid and then cuts out the damaged section of the vehicle, which leaves the X5 looking like it's been mawed by a bear.

Most people would be scared to go anywhere near a BMW with a damaged frame, but Arthur Tussik has the "it's just metal" attitude. His tools are also sometimes pretty simple: hammers and blankets. But the same cannot be said about the man's skills.

After lining up and welding a bunch of donor parts, the mechanic stabilizes the frame of the X5 and can get to work on replacing the actual skin of the car. He's also careful to install foam so as not to make the rear sound hollow. 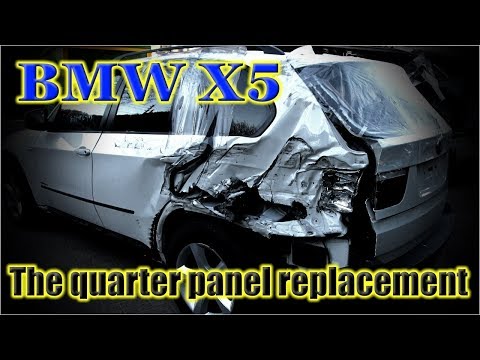