Back in 2008, everyone had its eye on the so-called 'Baby M', the E82 BMW 1M Coupe. This little coupe was ready to take the world by storm and most people wanted to test it.
1 photo
Even Tiff Needell found out about the sheer power and agility of the 1er Coupe in a dog fight test with a Porsche Cayman on the Fifth Gear track. Back then, Jason Plato showed him what the Bimmer was capable of. They only had the 135i and the non-S Cayman at their disposal, but the comparison is almost the same.

Today we're showing you how things are in the real life, when random drivers (without any kind of racing trophies on their shelfs) take their cars to the track and go for it.

The 1M was tuned by the guys from JB4 and has an Akrapovic exhaust system but that was only justified in order to keep up with the Cayman that came in the 'S' version. That means it has 325 HP and 370 Nm (273 lb-ft) of torque coming out of the 3.5-liter engine.

However, the BMW not only won, but it destroyed the Porsche, after its driver wanted to steal the show by hitting the throttle a bit early. The jump you saw at the beginning was only due to that cheating maneuver but nothing could hold back the 1M after he got settled on the tarmac. Good job! 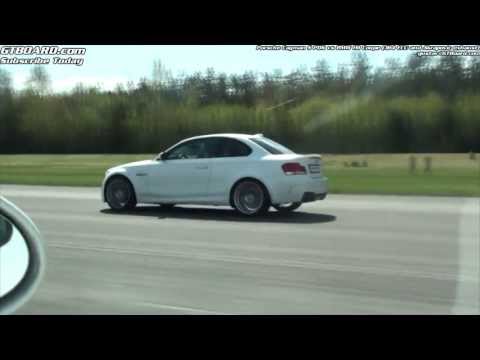