5 The BMW Concept XM Appears To Have Been Hit by the Ugly Stick Until It Broke
Car video reviews:
Up Next

Arguably, it’s not the name that will divide BMW fans once an all-new member of the carmaker’s SUV/SAV family gets revealed later this year, but its controversial exterior design.
12 photos

We say this because Europeans will probably remember that a few decades ago there was another mildly famous XM-branded vehicle, and it definitely wasn’t wearing a blue roundel badge on the front.

That car was the Citroen XM, one of the last French cars designed by the ill-fated Bertone styling house and with no relation with BMW whatsoever.

That said, BMW’s upcoming XM has a totally different explanation for its name, with X symbolizing the standard xDrive all-wheel-drive system that the vehicle will feature. The M, on the other hand, stands for Motorsport GmbH, making the SAV the first of its kind.

Citroen fans will never mistake the two-row crossover for a French sedan, that’s for sure, especially since it’s being exclusively tuned by BMW’s M division.

That said, it’s the XM’s looks that are the real controversy, with the model having been previewed by a concept car in late 2021. Even a former BMW designer gave it less than stellar reviews, but BMW could apparently care less about critical design opinions.

With that in mind, the massive SUV-coupe is slotting above the recently facelifted three-row X7 in BMW's SUV/SAV lineup, so expect everything to be turned to 11, including the design, performance and lastly, pricing.

The Concept XM also offered a preview of at least one of the powertrains, with BMW’s tried and true 4.4-liter twin-turbo V8 being partnered with an electric motor and a Li-ion battery pack to create a whopping 750 horsepower.

Essentially a performance plug-in hybrid, the crossover should also offer an electric-only range of about 50 km (31 miles), but keep in mind that the 200-HP electric motor will have to carry around 2.7 tons of vehicle in EV mode.

The massive weight is probably why the following pre-production prototype of the XM looks like it’s torturing its tires in almost every corner of the Nurburgring Nordschleife in this spy video.

Expect the BMW XM to be unveiled later this year as a MY 2023, with cars arriving in showrooms a few months after its official unveiling. 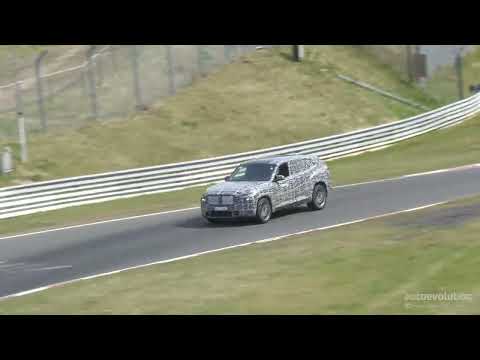