We know that this question is rhetorical for parents, while for all others, it doesn’t have an exact meaning just yet: is there anything we’re unwilling to do for our children? Let us substantiate with an eloquent example in the form of a 1981 C3 Chevrolet Corvette that underwent a drastic visual transformation via metal flakes and candy pink.
18 photos

Enjoying a very long run (between the 1968 and 1982 model years), the third-generation Corvette marked another stark departure in terms of styling from its predecessors. Even though some elements stayed the same (such as the hidden front lights), it was rather obviously something else.

But how do you make an example of the series pop when “America’s sports car” aficionados have no fewer than eight generations to choose from? Give it a glitzy paint job as the daughter’s 21st birthday present, someone probably said. Basically, that’s the gist of the video embedded below.

Nothing wrong with such a present; after all, we’ve even seen quite a few self-indulgences before. But what makes this Corvette truly amazing (we’ll leave you decide if for the right or wrong reason) is the artisan paint job used for the car’s morphing into a proper 21st birthday present.

According to the description provided by the Japanese YouTube channel Custom Z warriorz, someone wanted a custom paint job some three decades ago from the workshop but couldn’t come through with the order because his Camaro’s engine broke down. Now, if we understand the wacky description correctly, he finally got his wish granted, albeit for another car meant as an outstanding gift.

Naturally, it’s a very important moment in life, so it seems that nothing stood in the way of delivering a Corvette as a present that everyone (including the internet world) will forever remember. So, the car now sports a “Magic Flake Violet Pink” color instead of the initial (subtle) silver shade. Apparently, the effect is achieved using metal flakes and candy pink.

Just look at it; we can’t even decide if to call it a lollipop Stingray (technically the branding was only used on model years 1969 to 1976) or a pinky ’Vette abomination... 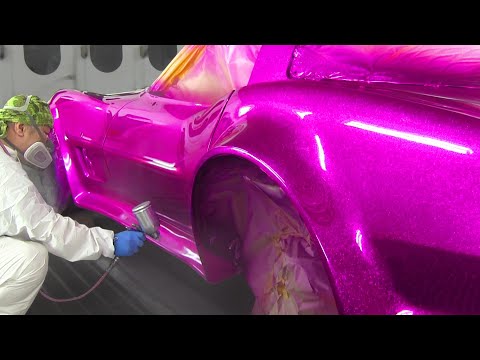