It's safe to say that Kim Jong-un, the supreme leader of North Korea, is not the most popular head of state in the world. And even though peace was on the agenda as he crossed the border today, he wasn't taking any chances.
4 photos

A team twelve bodyguards accompanied his stretched Mercedes S-Class limo. Even though it was deadly-serious stuff, we had a good giggle watching the squadron of fit men doing their best impression of a flock of geese.

Isn't that big limo supposed to be bulletproof? If somebody tries to shoot the supreme leader, are they supposed to take a bullet and save the paintwork?

North Korea has a procedure for everything, from getting up in the morning to eating. We bet the dirty dozen were trained to run in a special way with endless drills. The guy behind the left taillight looks a little out of sync, and we're concerned he might receive some stern disciplining after the video hits the web.

Dod they even care what the internet has to say there? We know Kim does, but regular citizens don't have access to the web. Like a terrible version of John Lennon's Imagine, North Koreans aren't allowed to buy cars or even homes. High-ranking officials can get a special permit, but in a country where a good wage is about $70 per month, you probably won't see many AMGs and Bugattis.

For somebody who's supposed to hate everything about the west, leader Kim sure likes his guilty pleasures. It's been reported that he spent about $20 million on flashy new motors about two years ago. Unfortunately, we have no idea what they are, but media says he "invested" $5 million in bicycles, about the same on motorcycles and even a couple mission on underwear. Honestly, we want to meet the guy who figured how much a dictator's whites cost. Is he a boxers or briefs kind of guy? 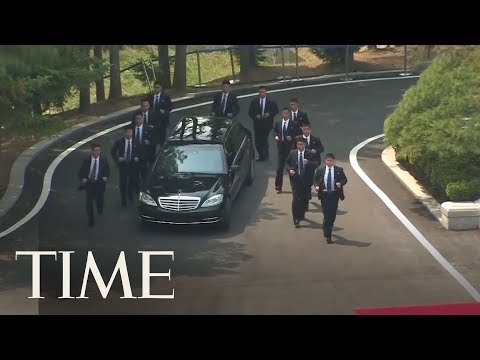