1 Nissan Prices the Ariya From $45,950 for the American Market

Apart from the current R35 generation, the Nissan GT-R R34 is perhaps the most instantly-recognizable one, and there's a very simple and straightforward explanation for that: Need For Speed: Underground.
14 photos

The Skyline was essentially a cheat code in the game that helped bring the tuning culture (and, perhaps, street racing too, but that tends to get swept under the rug) to the attention of an entire generation. It had the best numbers so the only thing that could keep players from using it was a bland appearance. Unfortunately for all the other cars in the game, the R34 Skyline is a beauty, especially after adding a widebody kit and a conservatively-sized wing at the back.

The old Skylines have banked on elegance a lot more so than the current one, and that's mostly down to their silhouette. The shape walks a very thin line between coupe and sedan, setting the GT-R apart from your Mitsubishi Eclipses, your Toyota Supras, or your Mazda RX-7s.

Well, the truth is that no matter how far back you go in the model's history, you won't really be able to find one you could honestly call bad-looking. In any case, you certainly wouldn't say that about the R32, the model that essentially entered the GT-R into its modern era.

Built in the very early '90s, the third-gen Skyline came with a 2.6-liter twin-turbo straight-six (RB26DETT) capable of producing 276 hp and 260 lb-ft (353 Nm) of torque. It sent all that power - quite a reasonable amount, by the standards of that era - to all four wheels via a five-speed manual transmission.

Today, though, 276 hp just wouldn't cut it. The R32 would still be quick (it originally reached 62 mph (100 km/h) in 4.9 seconds), but its standard performance couldn't justify the body modifications any owner of a classic Nissan GT-R would want to add to the car. So, a bit of engine tweaking would also be necessary.

The thing with messing about with one of these engines is that it's like a black hole: once it draws you in, it's impossible to get out. Because the potential is there, it's hard to limit yourself to just a few hundred horsepower when that magical one-thousand threshold is attainable. Which is how we end up with builds such as this one.

The twin-turbo setup has been replaced with a single (undisclosed) unit, but the result is a total output of 1,000 hp and 710 lb-ft (963 Nm) of maximum torque. Obviously, a lot more went into modifying the RB26 than just a new turbocharger, but that'll always be the piece that steals the headlines.

The owner also installed a new transmission, and even though some people may cry over the fact it's not a full-on manual, the six-speed sequential still requires grabbing the long shifter to change gears. Please note it also does it the right way (pull to upshift, push to downshift), unlike many modern cars.

Despite revving well into the red zone (8,500 RPMs are the norm), you can see the driver reach for the stick as the needle approaches the 8,000 RPM mark during his 186 mph (300 km/h) run, only to remember he was already in top gear. However, the remaining 500 or so RPMs prove to be enough to hit the target top speed and even exceed it by the tiniest amount. All while making glorious music. 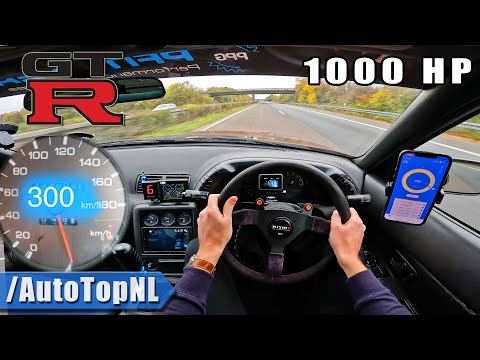