Home > News > Videogame Reviews
29 May 2022, 19:12 UTC ·
by Cosmin Vasile
Kart racers are the less technical sub-genre of the racing games. It’s one of the not-so-many places where developers have room for innovation and aren’t confined within the rigid rules of the bigger racing genre. That’s probably one of the reasons some of the funniest racing games involve karts and … animated shows.
17 photos

Warped Kart Racers borrows the same formula of bringing iconic animated series characters to the racetrack but does a little bit more than that when it comes to similarities with other kart racing games. For those who’ve played Mario Kart, it’s impossible not to notice Warped Kart Racers’ likeness to Nintendo’s game.

Stealing (in a good way) from the best is clearly not a bad thing and I definitely appreciate the folks at Electric Square for choose the best source of inspiration for Warped Kart Racers. Not to mention that their game is incredibly fun, especially if you’re a fan of any of the four animated series represented in Warped Kart Racers.

Featuring both an expansive solo campaign and a fun multiplayer mode, Warped Kart Racers lets players step into the shoes of one of the 20 playable characters from the 20th Television’s hit animated shows: American Dad, Family Guy, King of the Hill, and Solar Opposites.

Although not all characters are available right from the start, they are easy to unlock and don’t require too much grinding. Now, if you want certain customization items for your karts, it will require a little bit of grind, but considering all content is available for free and nothing is hidden behind microtransactions, it’s a trade-off I’m willing to make.

One small twist to the traditional kart racing formula is the addition of a battle arena where instead of having to be faster on the racetrack than your opponents, you just have to hit them more. A similar mechanic is available in racing mode too, it’s just that you’ll be using different weapons (including puke) to slow down your opponents.

Another important aspect for a racing game is the control scheme. I’m happy to confirm that controls are quite smooth regardless of whether you’re using touchscreen control or a controller. Obviously, the second option is preferable, but playing Warped Kart Racers using touching controls is just as accurate.

In Warped Kart Racers you don’t have to accelerate, the game will do it for you. Instead, you just have to maintain your kart on the racetrack, drift, jump, and throw various “weapons” at your opponents. Steering, drifting and jumping feel smooth for a kart racing game, so I have absolutely no complaints.

The 16 maps in the game are all very colorful and recognizable if you’re a fan of the animated series. Apart from the expansive solo campaign, the game has weekly and daily challenges that player can complete to gain more experience toward unlocking additional characters or customization items. Also, each character has different skins that you can unlock by simply playing the game. The same goes for additional karts, tire, wheels, antennas and even paragliders.

From what I can tell, all characters in the game use prerecorded lines from their respective animated shows. Luanne Platter from King of the Hill does not seem to have any lines in the game, probably due to the fact that it was voiced by the late Brittany Murphy.

Without pretending to come up with anything new, Warped Kart Racers accomplishes what it sets out to do: entertain. Partly coming from the lines each character delivers during races, partly from the fun racing mechanics, the entertainment is strong with this one.

If you’re looking for a kart racing game in particular, Warped Kart Racers is more than just serviceable, it’s actually very entertaining. The blend of animated series and kart racing gameplay mechanics is silly fun, so there’s absolutely no reason not to play this one, especially since it’s free on Apple Arcade.Rating: 75/100 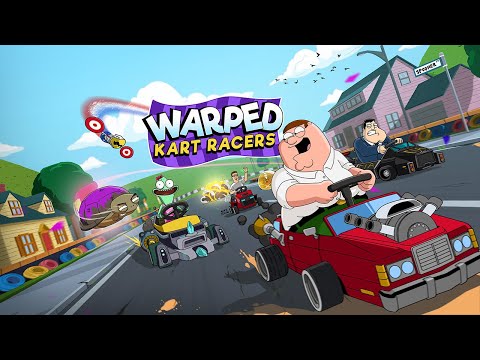