Want to Know the Name of My Favorite 56th Moab Easter Jeep Safari Concept? It's Bob

Aurel Niculescu
Even as Stellantis’ quickly moved on down its path of self-righteousness and graced the 2022 New York International Auto Show with yet another interpretation of Chrysler’s Airflow concept (will they ever release its final form?!), I cannot help but still dream of Jeep’s Moab Safari roster...
17 photos

Funny enough, the moment I read about Stellantis and its participation in a U.S. test of connected 5G vehicle technology, the Jeep Cherokee software fiasco from back in 2015 was immediately revived in my mind. Still, everyone needs to move forward, hoping that white hat hackers are going to find every weakness yet again and showcase the perils in a safe(r) environment.

However, when the seven Mopar concepts were officially deemed ready to bring the concept heat to Moab during the 56th annual Easter Jeep Safari, safety was the least of my concerns. Instead of musing about how stupid some automaker brands (wink, wink, Chrysler) are to drag along their reinvention for years or how Dodge keeps winning battles against the other Detroit rivals with old Charger and Challenger architectures, there was a sense of awe and fulfillment that perhaps this year Ford is not going to steal the show.

And take this from a Blue Oval owner, I am rooting with Jeep on this one – because of tradition, coolness, and legacy, above all. Sure, there is still time for Ford to try and do a 2021 Bronco Moab party-crashing all over again, but the element of surprise is not on their side anymore. Instead, Jeep made sure to secure the red carpet and all the spotlights it could get with no less than seven all-new concepts and a trio of slightly older SEMA Show 2021 apparitions. Yep, they brought ten bespoke prototypes just to be sure the attention remains firmly planted in their direction.

As for the five main Jeep concepts and two Jeep Performance Parts by Mopar prototypes, everyone will probably select a personal favorite. For me, it was quite easy to select the winner, even though the Detroit automaker did go out of its way to try and offer a wide selection. So, without further ado, the best Easter Jeep Safari (April 9-17, Moab, Utah) concept – in my humble opinion – is the aptly named Jeep Bob concept. Do not laugh because the name has a very sensible explanation!

Quite directly, the prototype that was both teased and officially revealed to “blur the lines between two mighty off-roaders, the Jeep Wrangler and Gladiator,” is said to be a “playful spin” on the successful trend of ‘bobbing.’ That means, in a nutshell, to chop up the sheet metal of a perfectly good truck and try to make it “the ultimate terrain tackler” instead of an honest load and trailer hauler. For example, Jeep’s Bob has gotten its bed ‘bobbed’ an entire foot (30.5 cm) in length, and it also comes with no doors and B pillars, as well as a custom, perforated hardtop mixed with a canvas top.

Under the hood sits an engine that is most hated everywhere nowadays, save for the Moab wilderness (perhaps) - a turbocharged 3.0-liter Eco-Diesel V6 engine that was tweaked via a Mopar cold-air intake and the software management of a TorqueFlite 8HP75 eight-speed automatic transmission for improved low RPM torque.

That is not all because the engineers did not want the designers of the multi-hued paintjob to stand out in a crowd. And thus, they opted to further add “a 3-inch (7.62 cm) lift with custom off-road suspension components, Dynatrac Pro-Rock 60 axles supported by a mix of King Coils and Bypass shocks, plus massive 40-inch tires (that) are mounted to 20-inch beadlock wheels.” Take that, you bad Bronco...

So, now that I am done and hint that Jeep’s short and eco-sweet yet feisty Wrangler Magneto 2.0 concept was the runner-up, which one of these bespoke prototypes were your favorites? 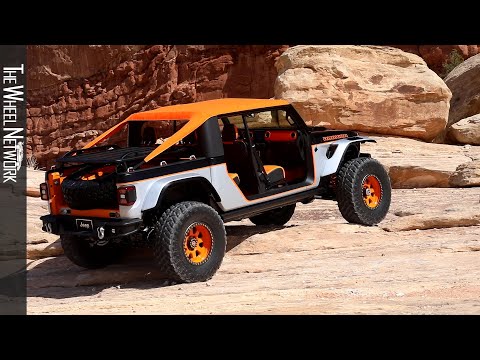 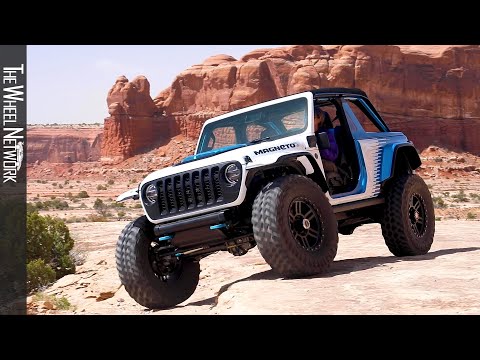