4 Zipline Launches Commercial Drone Delivery Service in the U.S., Teams Up With Walmart

Walmart Is Expanding Its Drone Delivery Network, Aims to Reach Up to 4M U.S. Households

Cristina Mircea
Drone delivery services are constantly expanding all throughout the globe, with more and more retailers teaming up with drone companies to offer customers a more convenient and time-effective way to shop. Walmart is one of them and it recently announced it’s expanding its drone delivery network to reach up to 4 million households in the U.S.
6 photos

Back in March, Flytrex shared the news that it launched its drone delivery service in Texas via national restaurant chain Brinker International. Last month, Wing also partnered up with Walgreens and three other stores to bring drone deliveries to the Dallas area.

Now it’s time for Walmart to announce the expansion of its drone delivery network created in collaboration with its partner, drone service provider DroneUp. Walmart plans to expand that network to 34 sites by the end of this year, aiming to be able to soon reach four million U.S. households across six states: Arizona, Arkansas, Florida, Texas, Virginia, and Utah. If everything goes according to plan, Walmart will be able to deliver over one million packages a year via drone, using DroneUp’s hubs.

So far, Walmart and DroneUp have successfully completed hundreds of drone deliveries within just a few months, and they plan to continue increasing those numbers. Customers will be able to choose between thousands of eligible items, from hot dog buns to Tylenol or diapers and they’ll be able to place orders anytime between 8 a.m. and 8 p.m. The delivery fee is $3.99 and packages will arrive by air in as little as 30 minutes.

In addition to using its drones for deliveries, DroneUp also plans to use the hubs to offer other types of services and serve other businesses in areas such as real estate, emergency response, public safety, or inspection, to offer just a few examples. As explained by DroneUp’s CEO, Tom Walker, the hubs will be manned and ready to go, with the ability to get a drone in the air within a minute. 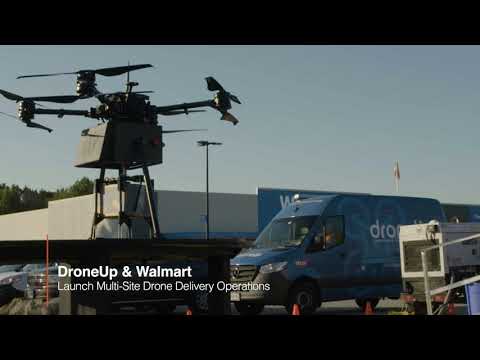