1 A 45 AMG in Matte Grey With Acid Green Calipers

Alex Oagana
Since we don't have a Japanese tuning mindset, we're not exactly the biggest fans of some Wald International tuning packages, with the Black Bison body kit for he W221 S-Class being among the only one that's mildly alright to look at from our point of view.
9 photos

Probably getting tired of the slowly diminishing attention that his car was getting, one Mercedes-Benz S 63 AMG (W221) owner first took it to Wald International to be fitted with the Black Bison kit.

Apparently, that didn't help much either, so he decided to completely change the car's color with a more imposing one.

The peeps at Diamond Black Exteriors (DBX) were more than happy to oblige, so they gave the Wald-modified S 63 AMG a look that will most likely stand out in almost any situation.

The frozen black color was first seen as a special color at BMW, but its success has made vinyl wrap makers to create their own version. We have a feeling that the most likely phone camera photos in the adjacent gallery don't make the car justice, with the actual car looking a bit nicer than in the images. 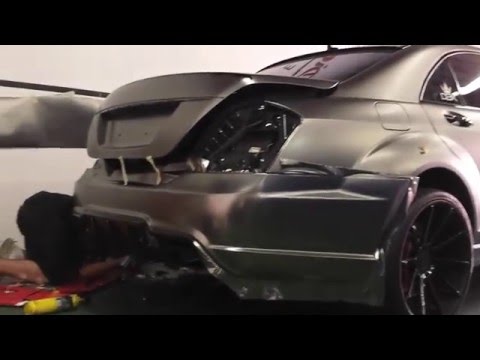