3 Volkswagen MEB Platform Could Be Shared With Ford

4 What Is Volkswagen’s MEB Platform?

5 First Volkswagen Factory for MEB-Based Electric Vehicles Opens in China in 2020
Car video reviews:
Up Next

Volkswagen is already heavily focused on crossover and SUV development, but we just got word they are planning an even more rugged machine. It's supposed to be called the T-Rug and is part of a company-wide strategy that involves other brands.
15 photos

VW has many off-roader models, ranging from the small T-Cross and going up to the Touareg. It also has plans for a pickup and a sporty crossover based on the Atlas platform. But the T-Rug is going to be an altogether more rugged machine. It's a weird name, but still consisten with their system.

Auto Bild claims it has an insider scoop on this model. According to the German magazine, the T-Rug will arrive around 2022 and will target rugged off-road legends such as the Land Rover Defender, the Jeep Wrangler, and Mercedes G-Class. As a result, it will have a short wheelbase body measuring around 4.5 meters with three doors, like the Defender 90 series, and a longer 5-door form measuring 4.85m from bumper to bumper.

Things get even weirder in the chassis department. While all the rugged off-roaders we mention have semi-separate frames, the T-Rug is expected to use the modular electric car platform. That means independent arms at all corners and a flat floor occupied by the battery.

Combustion engines have given VW a lot of headaches, and the T-Rug will be built in a CO2-neutral way. As a tech YouTuber recently said, the true Tesla rivals are going to come from established automakers. Hopefully, sufficient range is also baked into the construction.

Volkswagen is currently working on brand new cabin features like a 3D dash, a "hello VW" assistant and new infotainment. Apparently, the T-Rug won't have as many buttons as a Defender, but they will use protective film for the screens to keep them scratch-free. Chck out the video and tell us what you think of their rendering. 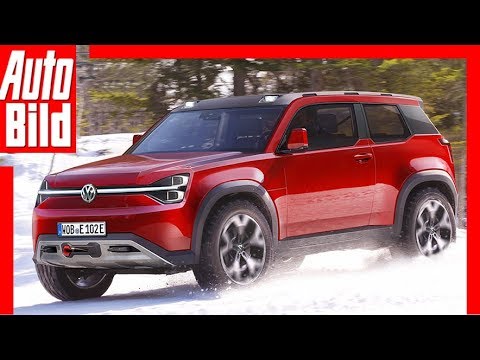