Born as a small family car that soon turned legendary, Volkswagen’s Golf probably needs no introduction for anyone even vaguely familiar with the automotive world. But how about a feisty (CGI) presentation?
19 photos

Soon enough, the German automaker will celebrate half a century of incredible stories related to the eight generations of Golf models that have been created so far. Yet, just like with other automotive icons, some people cannot help but return to the origin and try to have the best of both worlds: classic looks mixed with contemporary technology. That is sometimes called restomodding in the real world.

However, the virtual realm sometimes does away with any characterization and quickly finds its niche. A case in point. The pixel master better known as carmstyledesign1 on social media, has presented us with a vintage compact car that was elevated to full restomod performance, or even moved beyond. And did so with a digital project called Volkswagen Golf “R500,” perhaps for good horsepower measure.

Alas, before we start any speculation regarding the pony count, let us notice this CGI expert has started to exhibit powerful symptoms of signature styling as of late. As such, this European hero comes with the same widebody attire (albeit adapted to Hot Hatch aero queries), deep-spindle aftermarket wheels, and slammed attitude as other restyled stars from the YT channel’s playlist.

And there is no need to take our word for granted as the author himself pointed out the R-livery-styled VW Golf R500 shares at least some common design traits with prior vintage designs, such as a 1967 Ford Mustang restomod. Well, no argument with that, as now both look ready to eat modern supercars for digital breakfast, lunch, and dinner. Especially if the “R500” moniker means exactly what we think it does and 500 ponies are virtually lurking under the bulging, vented hood! 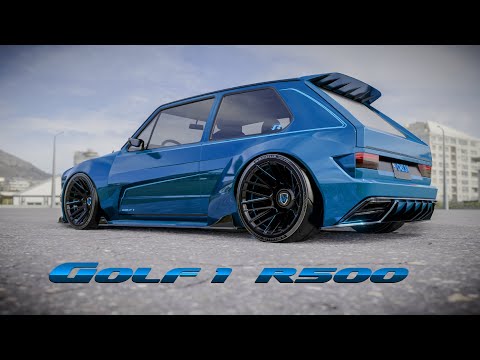