1 Volkswagen ID.4 Is Still Riddled With Software Problems, Company Accused of Looking Away

2 The New Volkswagen ID. LIFE Will Now Look Like This Sketch

4 Live Pics: VW ID. Life Looks Like a German Reinterpretation of the Honda E
Car video reviews:
Up Next

This Kitschy Lamborghini Urus Is Supercar-Fast, Can Mix It With the Huracan Performante

Volkswagen is taking electric mobility very seriously, and they show it in every possible way. This time, on the Volkswagen News official YouTube channel of the Volkswagen Passenger Cars brand communication. The 2021 concept car VW ID. Life serves as the means to hint at some of the future features of electric cars.

There are few details about VW’s production car based on this concept – a price beneath 25.000€ (roughly $25.000 at the time of this story) – and some particulars about the drivetrain and size.

Front-wheel-drive is one of VW’s proposed solutions for extending the range of their next-gen electric vehicles, with the battery pack gaining more space by removing the rear axle electric motor. Not a significant inconvenience, as most of us are already used to 2WD, and this subcompact concept is not for demanding roads or racetrack performance.

Although VW is undecided when it comes to where the VW ID. Life sits in their range, as it’s in between the Polo and the Golf; the wheelbase of the electric concept car is 8 inches longer (20 cm) than a Golf Mk III of 30 years ago. However, with the Golf family getting more prominent with every generation, those eight inches don’t tell much.

Still, the video is more explanatory than plain numbers; the VW ID. Life is pretty spacious - thanks to its foldable seats, it’s big enough to sleep in. While the video is not very offering in terms of specs, the car gets praise for its electrifying capabilities. Please don’t stray too far into the imagination realm; the electrifying specs are exactly what they sound to be.

The ID. Life is one big power bank on wheels that can feed any electrical household device. Since the most convenient electrical appliance a driver can carry in a subcompact car has to be reasonably small, the VW commercial film shows a practical example.

The standard electric grill is small enough to fit in the vehicle and can be used regularly for weekend outdoor adventures, picnics, or vacations. Although VW has an appetite for the electrified future of transportation, this illustration might not be to everyone’s taste.

While the next-generation of cars is growing more and more in electric numbers, barbecuing is very much attached to red hot carbon-fueled fires (yes, firewood has much carbon in its structure). Nonetheless, the idea is not to drive people away from the fire grill with a “wood-gate” but to prove that future electric cars will have more powerful batteries, giving a broader range of possibilities.

While it may seem counterintuitive, it is worth noting that the first commercially available electric VW car came in 1993, with a special Golf Mk III. Dubbed “CityStromer,” the vehicle had a production run of 120 examples. It had a range of just 56 miles (90 kilometers) at 31 mph (50 kph). Because battery technology meant lead-acid cells three decades ago, the car was enormously heavy - 3,330 lb for a small three-door hatchback.

That’s a ton and a half, some 50% more than a regular four-cylinder, five-door, gasoline-powered Golf Mk III. The battery was tiny by today’s standards – 17,3 kWh – and the top speed was also a meager 62 mph (100 kph). Even if it couldn’t stir an automotive revolution, the CityStromer hinted at what the future had in store, with regenerative braking featured on the 1993 electric Golf.

Something that EV manufacturers tend to put as standard in today's vehicles. Moreover, while the ID. Life design will not become a mass-produced reality, it can still give the motoring universe some of VW's unconventional ideas for future options in electric automobiles. 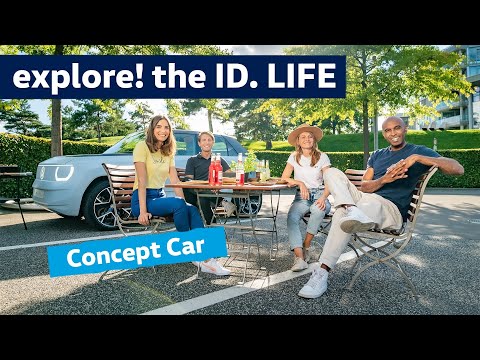