3 Porsche 959 “Back to the Future” Restomod Has Gull-Wing Doors, Desire to Disrupt

Today, the legendary VW Beetle is only traveling the car plains of Valhalla. Meanwhile, the Porsche 911 is more than alive and well. Its 992-based motorsport-influenced GT3 is collecting as many accolades as possible. But some people still love to remind us of their historic connection.
11 photos

That is something that will surely get on the nerves of people who do not want the 911 to be compared to a Beetle anymore. Sure, there are arguments from both sides. But let us keep it plain, friendly, and digitally “simple.”

With help from Khyzyl Saleem, the virtual artist better known as the_kyza on social media, who seems ready to endure the outrage of some diehard enthusiasts for the greater good. That would be an interesting idea for resurrecting the dearly departed Volkswagen Beetle. For a third time. So, Type 1 was the original, followed by a couple of modern reinventions from around the 2000s and 2010s.

But now there is also a hypothetical third contemporary generation that rekindles the Porsche 911 connections in more than one way. And, in the process, becomes the epitome of a pocket rocket Hot Hatch. Unfortunately, this “Beetle x 992 GT3” mashup is only possible in the virtual realm.

It would be a handful, from the technical standpoint, in the real world. However, across the digital kingdom, this is surely not the first Beetle-911 rodeo. Alas, it might be the best one to date. Especially for imagining the looks on anyone’s face when an outrageous 1970s Beetle restomod like this would line up for a dragstrip or track battle.

And then just disappear into the horizon with help from the 4.0-liter flat-six that churns out 503 horsepower. Inside the 911 GT3, it helps the Porsche thunder away to 62 mph/100 kph in 3.4 seconds. Now, imagine what it could be capable of when propelling a car that is half its weight... Yes, we are just Hagerty-series daydreaming, we know! 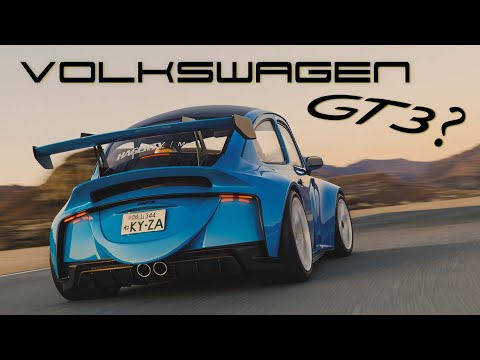