Is creativity something that we are born with? Or is it something that develops later on in life? The answer will vary depending on who you're asking. But I do know that using your creativity can be a good way to unwind. Be it that you're playing an instrument, designing a product, or writing poetry, you should exercise it as often as possible.
20 photos

Creativity embraces many shapes in the world of diecast enthusiasts. You can get creative with the way you're displaying your collection. You can get creative with the collection itself. When talking about mainline Hot Wheels products, some collectors will swap out the standard wheels for some higher quality, better-looking ones. But some go even further than that. Changing the color of a diecast vehicle is the next step.

But the sky's the limit. Who's there to stop you from building something completely custom? Any collector will tell you that the rarer your items are, the better. Those who don't have the skills, time, or creativity to work on their diecast vehicles will often turn to chase down Treasure Hunts and Super Treasure Hunts. Those are rarer than your average casts, and will ultimately feel more special and be worth more if they get resold.

But think of it this way. If you're going to build a custom diecast, that's going to be unique. I've seen a lot of people resorting to this idea over the past few years. But few have ever developed projects as impressive as the man behind Jakarta Diecast Project. In the past month alone he's released videos of projects such as a six-wheeler VW T2 Flatbed truck, an Acura NSX with a matching camper trailer, a Rocket Bunny GR Yaris, and a widebody Mercedes-AMG GT.

But those seem to pale when compared to his new Volkswagen-Porsche hybrid. Let's face it, when was the last time you saw a Volkswagen Beetle packing a flat-12 engine off of a Porsche race car? But that's just half the story. The project starts with a standard 2018 VW Bug, which was part of the Checkmate series. After stripping it down piece by piece, it loses the black "Pawn" paint job.

This guy even has a set of power tools for the job, and we get to see the rear half of the VW getting cut off. Then, the rear part of a 2018 Porsche 917LH comes into play. You can't help but think of a centaur right now. But this isn't going to be half-man, half-horse, but half-Beetle, half 917LH. The initial mock-up looks good, but there's more to come. This hybrid will be running on two different kinds of wheels, both of which look highly realistic.

It came as a bit of shock seeing the car in the next phase. The front wheel arches are about to be extended, and the whole process is just so satisfying to watch. When you didn't think things could get any more insane, we see a custom handmade engine. That's a replica of the flat-12 engine used by the Porsche 917LH at Le Mans. Preparation for the Marlboro livery begins as the hybrid diecast gets taken to the spray booth. The result is nothing short of breath-taking. It's a shame the artist doesn't want to sell any of his projects! 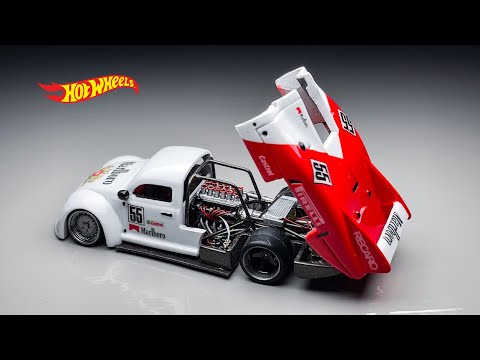