2 2022 Range Rover Spied Bucking While Testing at the Nurburgring

Home > News > Spyshots
Mihnea Radu
Volkswagen has delivered on its previous promises and turned the letter "R" into a performance brand. But will it be taken seriously? Let's look at this spy video of the Golf 8 R and Arteon R Shooting Brake to find out.
6 photos

We love the fact that they made the Arteon R Shooting Brake, but it could have been way better. Early reports said the Arteon was getting either a 2.5 TFSI or a turbocharged VR6. Both would have been awesome, but something must have gotten in the way.

Either the European emissions regulations were too harsh or Audi didn't want its unique 5-cylinder engine to be shared. Thus, the R Shooting Brake has to make use only of a 2.0-liter turbo making 316 horsepower, which isn't that impressive considering what Kia and Hyundai are selling.

Alas, the Arton Shooting Brake is a beautiful car that we enjoy seeing on track. And the R treatment means lots of racer components - big wheels, blue brakes, a body kit and the quad rectangular exhaust pipes.

Meanwhile, the Golf R has yet to be officially revealed. Its 2.0-liter turbo is believed to have about 13 more hp, plus it has an easier job pushing the compact hatchback body. There no camouflage on the prototype either, which means we get to see every part of the new exterior package. We're not sure it's an improvement over the old model, but it's certainly better than the GTI.

Earlier this week, we showed you the first photos of the new Golf R Variant, which is a wagon version of this hatchback. But the R family isn't limited to just these cars. It also includes the previously revealed T-Roc R, a mini crossover, and the Tiguan R. It's funny how Volkswagen managed to use the same tool (engine) for every job. 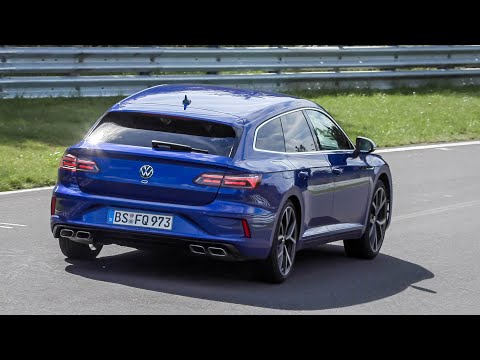