1 Volvo Trucks Unveils Hybrid Powertrain For Heavy-Duty Truck, It Has an EV Mode

5 700 hp Volvo FH16, the World's Most Powerful Truck
Car video reviews:
Up Next

After being one of the first manufacturers to introduce an automated braking system on its production cars - one that had irritating alert sounds and that famously failed to function during its press presentation event - Volvo is now elbow-deep in creating an autonomous driving system.
8 photos

You know, Volvo and absolutely every other brand in the automotive industry, not to mention some others from different fields of activity. Everyone is now working to create the first and the best self-driving suite, and you can't help thinking how much faster and better this R&D effort would be if everyone joined forces instead of going their separate ways.

Anyway, if you're looking for peace and understanding, you've come to the wrong place. The car industry isn't a friendly place. There's some serious competition going on, with real money involved - and lots of it. That's the kind of thing that usually makes people forget about niceties and focus on their own plate.

Volvo has made ambitious claims about the safety record of its vehicles - no casualties in a Volvo car by 2020 I believe it was - and that's based on the development of driver's aid systems that would eventually come together in a self-driving package, but the Swedes aren't just working on their passenger cars.

Volvo Trucks is just as involved in this quest for AI drivers, and it's long been speculated that we might actually get to see autonomous semis on the road before actual cars. It's hard to judge the progress made by the Scandinavian company from this clip, but watching the behemoth stop inches away from the man that sits inside the cabin but is not the driver (we'll have to come up with a name for that) will give you the chills anyway.

That might also be because it all happened at 1.3 kilometers (0.8 miles) underground inside a mine, so it must have been freezing. Apparently, the automated truck is being used there to help with the transport flow and safety inside the excavation, which would make it one of the few practical applications of this technology.

Apart from looking like the scenes from an unreleased Alien movie, the clip doesn't provide much in the direction of information. It does, however, end with the tagline "Discover how automation creates new opportunities at volvogroup.com." We bet you there are a few truck drivers who read this and go: "Ha! New opportunities and fewer jobs, hey, Volvo? Why don't you just go..." we'll stop here with our imaginary rant, if you don't mind. 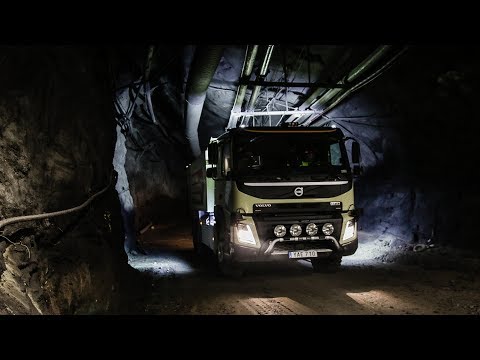