5 First Look Inside the Volvo P1800 Cyan Hints There Was Room for Larger Engine
Car video reviews:
Up Next

Canelo Alvarez Knows Good Motivation When He Sees It: A Ferrari LaFerrari

Cyan Racing, the official motorsport partner for both Volvo and its Chinese parent company Geely, made the headlines this past fall with a spectacular project slightly more oriented towards regular customers. That, of course, if said customers were asking for a classic Volvo P1800 coupe instilled with racing-derived technology.
51 photos

Basically, Cyan used its motorsport expertise to bring forward in time a car that was made famous in the 1960s. They say they did it “in a delicate way,” but we’re not so sure they entirely grasp the concept since the result is a wider and much wilder car with larger wheels and no creature comforts (such as ESP, ABS, or even a brake booster).

Anyways, we quickly fell irremediably in love with this European restomod because of its gorgeous looks and the promise of thrilling sensations bestowed upon the driver via its 420-horsepower 2.0-liter turbocharged four-cylinder engine (derived from the Volvo S60 TC1 racer).

Cyan knows very well that snow has covered many parts of the Northern Hemisphere and has recently decided to take advantage of the freezing conditions to have some blue on white sideways contrasting fun. As such, the P1800 Cyan headed up into northern Sweden alongside chief engineer Mattias Evensson and his (probably motley) crew to play in the snow at -20 degrees Celsius (-4 degrees Fahrenheit).

The team traveled almost 1,000 km (around 621 miles) north of the company’s Gothenburg headquarters to the small town of Are in Jämtland County, Evensson’s hometown and a leading Scandinavian ski resort that’s surrounded by frozen lakes and lots of... snow.

“What really struck me from this expedition was that the car is so easy to drive and that you do not need to provoke it to get it where you want,” explains Evensson, the Volvo P1800 Cyan Project Manager and Head of Engineering at Cyan Racing. “The basic concept of the car seems to work really well, it does not matter that much if you are on a bone-dry racing circuit, a wet and twisty country road or on the crisp ice here in northern Sweden.”

It’s only natural to feel that, since the Volvo P1800 Cyan is said to weigh less than 1,000 kg (2,205 lbs) and the driver gets to play with a dog-leg manual gearbox and a rev-happy engine that’s going to give more and more power until you eventually reach the redline. 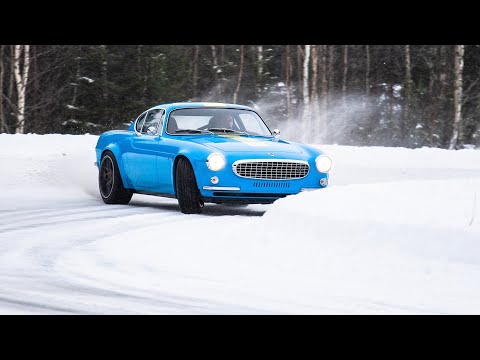