1 Truck Makers in the U.S. Get Access to Even More Government Funding to Go Green

5 Daimler Trucks Executive: "If Tesla Semi Delivers, Something Has Passed Us By"
Space Junk

Truck-Sized Asteroid About to Make Close Pass Over South America, Has Astronomers Talking

Volvo Electric Trucks No Longer Silent, Listen to What They Sound Like Now

Home > News > Industry
Otilia Drăgan
With EU sound regulations for electric vehicles soon coming into effect, Volvo introduced an acoustic alert system for its electric trucks. And it’s not just one sound, but 4 different ones.
1 photo
Volvo’s electric trucks now have a voice. Not literally, but they can make themselves heard on the road. And this is not because they wanted to brag, but because it’s a safety requirement. Starting from July 1st 2021, all new electric vehicles in the EU will have to emit certain sounds when travelling at a speed below 12.4 mph (20 kph), in order to alert pedestrians and cyclists. The sound level should increase in direct proportion with the speed, so for a maximum speed of 12.4 mph (20 kph), the alert system should have at least 56 decibels.

Volvo came up with 4 different sounds for moving forward, speeding up, reversing and idling. They’re not particularly special, but they’re not obtrusive either, depends on how you look at it. It would have been more fun to add some truly unique sounds – this was a golden opportunity – but the brand wanted to choose something that would comply to the regulations without being too noisy.

According to Volvo, these sounds are loud enough to fulfill their warning purpose, but cannot penetrate through walls. And their intensity varies based on the speed. This way, pedestrians and cyclists can stay safe and, at the same time, the electric trucks are still quiet enough to not disturb other drivers and to perform nighttime deliveries.

It’s like that time when you’re describing your flaws disguised as qualities, for a job interview, saying “I’m too hard-working.” Volvo trucks are presented as being just so quiet that they needed to have sounds added to them. But the truth is that electric trucks’ lack of noise has both benefits and shortcomings.

With this new alert system, the brand hopes to make its green trucks even safer. But, while “zero accidents” involving its electric trucks sounds great, that’s not entirely up to Volvo. 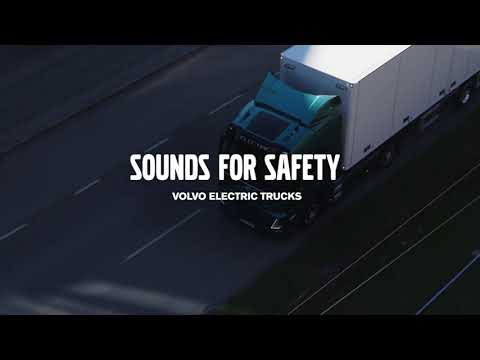