2 How Long Can an Electric Vehicle Keep You Warm in a Freezing Traffic Jam?

While many carmakers concentrate on fitting bigger batteries into their electric cars, a simple test shows efficiency is more important, especially in adverse conditions. This is where Teslas truly shine and also where traditional automakers need to take notes.
9 photos

Volvo was one of the first traditional carmakers that pledged to give up internal combustion engines and adopt electrification. Nevertheless, the Swedish carmaker showed it still needs to work harder to make this dream come true. They’ve indeed got their Polestar brand of electric vehicles while also offering the Recharge EVs under its own brand, but this is not enough to compete with the best in the industry. Volvo cars are notorious for needing big batteries to achieve reasonable range, while the competition makes do with a lot less battery capacity.

This became obvious during a winter test in Norway, where the Volvo C40 Recharge entered the turtle mode (reduced speed and power) on a test course that was supposed to be shorter than the advertised range of the car. The result was detailed in Kris Rifa’s latest YouTube video, after filming the car running in winter conditions for 145 miles (233 km).

For those who forgot, the Volvo C40 Recharge has a 78 kWh battery (75 kWh usable) that should allow it to travel for 278 miles (448 KM) according to the more relaxed WLTP European standard. Even when considering the EPA range (226 miles/364 km), the C40 Recharge shouldn’t have any problems completing the test. We don’t know what made the Volvo lose so much of its range throughout the test, but we assume it was a combination of cold temperature, winter tires, and wet snow/slush on the road that crippled the Swedish EV.

The test started at 97% state of charge (SOC) and the computer confirmed the route will complete with 12% battery left. Halfway through the challenge, the car still had 54% SOC, which appeared enough to safely complete the task. But the problems started below 10% SOC, as the car entered the turtle mode, with reduced power and speed.

A few minutes later, at 7% SOC, a drastic reduction in power followed and the car struggled to maintain a speed above 60 mph (97 kph). The car announced the battery will last for another 19 miles (30 km), while there were only 5 miles (8 km) left to go. It soon got to 3% SOC, at which point the car was unable to drive above 17 mph (27 kph). Driving on the highway shoulder at this speed is a potentially hazardous situation, so you see why this is important.

Kris Rifa concluded the Volvo C40 Recharge would only be able to drive around 140 miles in winter conditions before it gets difficult to maintain the desired speed. This is significantly less than the base-version Tesla Model 3 with an LFP battery. If you recall, this has a 60 kWh battery and still managed to ace the same test course with 19% SOC left. This means the Model 3 achieved a consumption rate of 18.8 kWh/100 km (3.30 miles/kWh), while the Volvo needed 31,4 kWh/100 km (2 miles/kWh).

This clearly shows the Volvo C40's efficiency is a lot worse than that of a Tesla Model 3. Yes, you can live with a shorter range and charge your car more often. But being crippled in turtle mode on the highway’s shoulder should never happen, as this could lead to dangerous situations. We hope Volvo will see Rifa’s video and alter the battery management system in their cars to avoid situations like this. 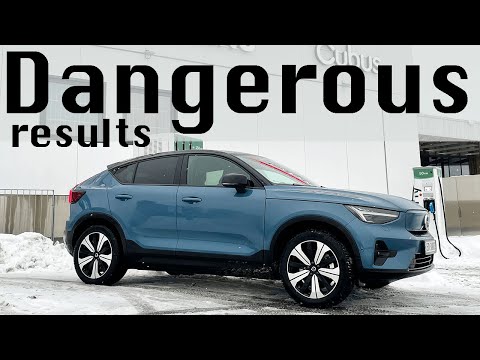