2 Top Carmaker Releases the Chip Announcement Everybody Was Waiting For

4 Europe Car Sales Drop to the Lowest Point Since 1996

Twinned with the XC40, the C40 is an electric utility vehicle that flaunts a coupe-ish sloping roofline. Officially dubbed C40 Recharge, this fellow promises up to 226 miles (364 kilometers) of range as per the EPA.
56 photos

The agency further highlights 39 kWh per 100 miles (161 kilometers), as well as MPGe figures of 94 in the urban jungle and 80 on the highway. The question is, how does the Swedish SUV perform in real-world scenarios?

Both trips begin with an 80-percent state of charge rather, which is roughly 62.4 kWh of the 78-kWh battery. Volvo further offers a single-motor C40 that rocks a 69-kWh battery. This version promises 434 kilometers (270 miles) under the Worldwide Harmonized Light Vehicle Test Procedure, which isn’t as close to real-world figures as the EPA’s testing procedure.

Back in Loveland, Colorado, after 106.6 miles (171.6 kilometers) of driving, the digital instrument cluster shows an energy consumption average of 31.7 kWh per 100 miles at 57 miles per hour (91.7 kilometers per hour). Of course, these figures account for in-town driving, merging, and all that jazz.

Juicing up to 80 percent costs $12.09 at an Electrify America charging station, and Max is ready to hit the road again. On this occasion, he reports 36 kWh per 100 miles and 63 miles per hour (101 kilometers per hour).

That being said, how much range did the C40 Recharge lose between these runs at 65 and 75 miles per hour? 226 miles multiplied by 0.02, the percentage difference between the runs, is 4.52 miles of range. 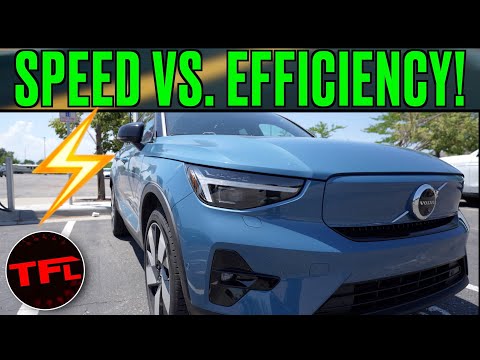