5 Volocopter Set to Launch Flying Taxis in Singapore Within the Next 2 Years
Car video reviews:
Up Next

Volocopter Announces Its First Air Taxi Exhibition in Asia, Will Showcase Its VoloCity

German eVTOL (electric vertical take-off and landing) aircraft developer Volocopter will showcase its VoloCity air taxi in Singapore, in what is described as the company’s first exhibition in Asia.
6 photos

Singapore is one of the first places where Volocopter plans to launch its highly-anticipated aircraft and was also where the company conducted Asia’s first crewed, public test of an air taxi, in a city center over Singapore’s Marina Bay. It happened three years ago and Volocopter has kept a close relation with the island-country ever since.

The public VoloCity exhibition will be a long-term one, launched in collaboration with the Institute of Technical Education (ITE) in Singapore. It will feature a 3D VoloPort scale model and detailed info on the urban air mobility industry. Visitors will also get the chance to sit in Volocopter’s air taxi to get a taste of how it feels to ride in such a next-gen aircraft and learn more about the new form of transportation.

Free guided tours will be offered to visitors on a regular basis starting next month, with visitors interested in taking one being encouraged to sign up. The exhibition will be hosted by ITE and will be located at Aerospace Hub, ITE College Central.

According to Christian Bauer, Chief Commercial Officer of Volocopter, this is the perfect time for the company to showcase its VoloCity in Singapore, as the latest local market survey showed a significant uptick in the number of respondents excited to try an air taxi service.

Volocopter’s air taxi is expected to hit the market in 2024. The VoloCity eVTOL aircraft is a two-seater with 18 rotors that operate within a narrow frequency range, canceling each other out. That translates into a silent flying machine that can travel on short distances, offering ranges of up to 35 km (21 miles) on a charge. The air taxi can reach a top speed of 110 kph (68 mph). 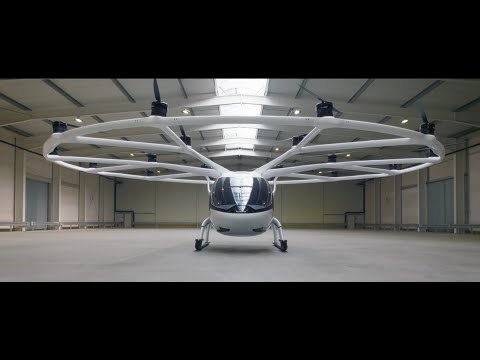