German startup Volocopter already boasts of being the only UAM company to focus on a variety of services, from hauling goods to carrying people over short or longer distances. As of this week, the company also boasts of owning the first eVTOL to take a public manned flight in the United States - a debatable claim, but a major milestone nonetheless.
6 photos

At this year’s edition of Experimental Aircraft Association’s (EAA) AirVenture show in Wisconsin, Volocopter brought its Volocopter 2X prototype for a crewed flight demonstration. The prototype for the 2-person VoloCity has been undergoing both manned and unmanned tests, with the more recent demo taking place at last month’s Paris Air Forum.

The one at the Oshkosh air show was manned and slightly longer: Volocopter notes that the aircraft took off from Wittman Regional Airport at 2:45 PM CST, and flew for about four minutes, at a height of 160 feet (49 meters) and a top speed of 18 mph (29 kph). This is, according to the company, the first eVTOL (electric takeoff and landing aircraft) to take a crewed flight in the U.S. Visitors at the Volocopter booth also had the chance to hop into the company’s proposed eVTOLs for a feel of what it would be like operating them.

VoloCity is still a long way from becoming a reality, and the 2X prototype clearly shows that. But this was a major milestone, one that both confirms that urban air mobility (UAM) is a viable solution for personal transportation in crowded urban areas and solidifies Volocopter’s position as market leader. As noted above, the company boasts of being the only one to adopt a more holistic approach to UAM, offering a wide array of services that would cater to both private individuals and fleet operators.

“We can talk about our lead in certification, low noise emissions, and global partnerships all we want, but nothing shows just how close we are to launch UAM as a service as does flying an air taxi in front of crowds and inviting people to sit in our aircraft. Air taxis are coming, and we are working to bring electric flights to cities around the globe in the next two to three years,” Florian Reuter, Volocopter CEO, says in a statement.

Speaking of certification, Volocopter claims lead here, too. It already holds European Union Aviation Safety Agency (EASA) certification to design and produce aircraft in-house, and has applied for similar approval from the Federal Aviation Administration (FAA) and the Civil Aviation Authority in Singapore (CAAS). Certification to fly the aircraft is pending. 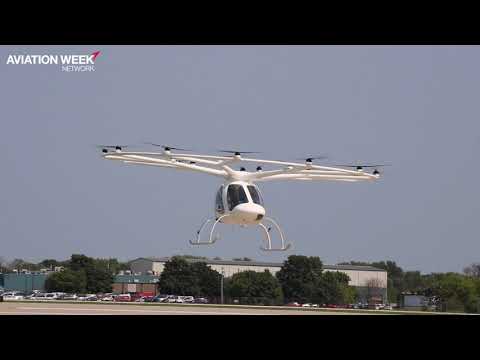