1 Should Skoda Build a Rapid RS?

While other automakers are playing with the idea of mass-market hybrids and electric cars, Volkswagen Group has continued to rely on its family of petrol engines as it tries to take the no.1 spot in the automotive industry. And as far as engine families are concerned, none are as well known and especially widespread as TSI. Promising to maximize power from a smaller displacement while limiting fuel consumption, TSI engines are widespread across Volkswagen Passenger Cars, Audi, Skoda, SEAT and a few other applications.
16 photos

TSI engines combine what Volkswagen has learned from TDI diesel tech and FSI Fuel Stratified Injection engines. TSI is available on an increasing number of our cars, from Polo to Passat. The benefits are quite clear when you compare them to older MPI systems: high specific torque is available from much lower revs and maintained at most rpms. This makes cars equipped with these engines more lively at lower revs, which in turn makes them more economical and cleaner.

When comparing an older 1.6 105 hp MPI automatic with the new 1.2 105 hp TSI DSG, Volkswagen found that emissions had dropped by a very impressive 50 grams. In addition, unlike a hybrid engine powertrain which can’t keep up with with highway speeds once the battery is drained, TSIs have no such downside. In fact, the PFI (Performance Feel Index developed by the automaker) figures are even better due to increased torque. Saving money without forfeiting performance sound too good to be true, which is why we need to examine Turbo Stratified Injection further.

The first driving principle behind the system is direct fuel injection. Volkswagen uses the latest injector technology to shoot the fuel directly into each of the cylinder’s combustion chamber at higher pressures. This ensures less pumping losses and a more efficient combustion, thus increasing fuel economy.

The TSI engine combines direct injection with turbocharging and in some cases even twincharging, as the some performance-oriented 1.4 TSI engines are equipped with both a supercharger and a turbocharger working together for better boost, as the engine-driven supercharger operates at lower revs, with the turbocharger powered by the exhaust gases joining in as engine speed rises.

Another important component for a successful TSI is an intercooler to reduce the temperature of the air coming into the engine and thus allow more of it to come in and reduce the posibility of detonation, or engine knocking.

An easily overlooked element of TSI technology has always been downsizing: 3-cylinder engines replacing 4-cylinder one, 1.2s replacing 1.6s, V6s replacing V8s and so on.

Volkswagen never stops inventing new technology to make their TSI engines competitive. The older 1.4 122 hp pioneered a new injector system with six fuel bores, while the latest 1.4 140 hp has a better cooling system and Active Cylinder Management, which is basically an advanced form of cylinder deactivation.

Here are some of the most important and widespread TSI systems:1.0 TSI/TFSI - the 3-cylinder loaner
The first 1-liter turbo engine was first announced at the 2013 Frankfurt Motor. It shows Volkswagen wants its customers to have a downsized alternative, just like the 1L engines offed by Opel and Ford.

The first major application of this 3-cylinder TSI was come with the 2014 Polo facelift. However, soon after its launch Audi also introduced the A1 ultra with the same setup, followed by the 2015 Skoda Fabia.

The engine is derived from the 1-liter in the VW Up!. However, since it's been designed for efficiency, most of the internal components are different. 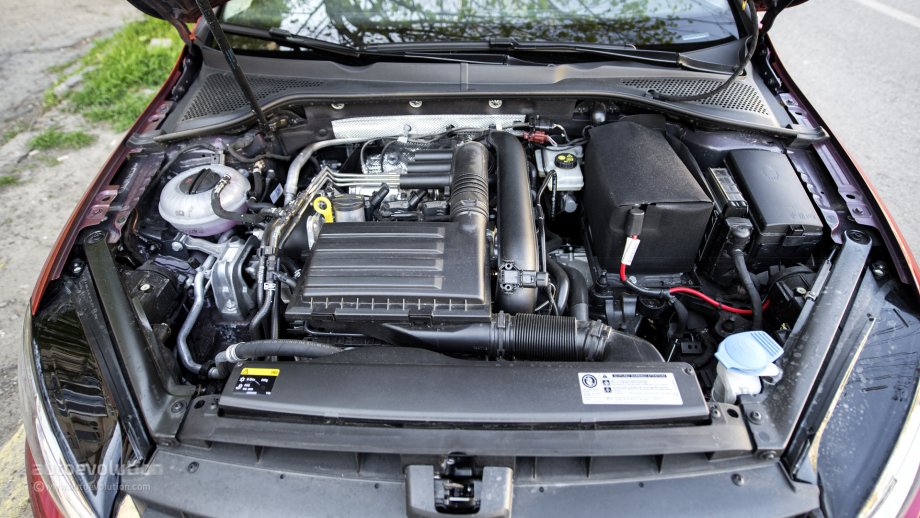 Displacing 1,196 cc, the 1.2 TSI engines all have the same 71mm bore and 75.6mm stroke. They have a cast aluminum alloy block for lightness and die-forged steel crankshaft for strength. This family of four-cylinder turbocharged engines is produced by Skoda Auto at the Mlada Boleslav. All use demand-controlled injectors which eliminate the need for a return fuel system. The single turbocharger offers 1.6 bars of pressure and is equipped with a front-mounted intercooler.

The 1.2 TSI engine is widely available across all subcompact and compact Volkswagen Group cars. This includes the VW Polo, Golf, Beetle, Jetta, Golf Cabriolet, Golf Plus, Caddy, Touran in various power outputs. The list of SEAT and Skoda models is just as extensive and includes the Ibiza, Leon, Altea, Altea XL, Skoda Fabia, Rapid, Roomster and Yeti. Audi also offers it on both the A1 and the A3.

The 1.2 TSI engine was presented in December 2009 for the Volkswagen passenger vehicles and gradually began being introduced on SEAT and Skoda models the next year. Three different output versions of the engine, with increased performance and production costs. All horsepower figures are expressed under the DIN system, since VW is a German automaker: 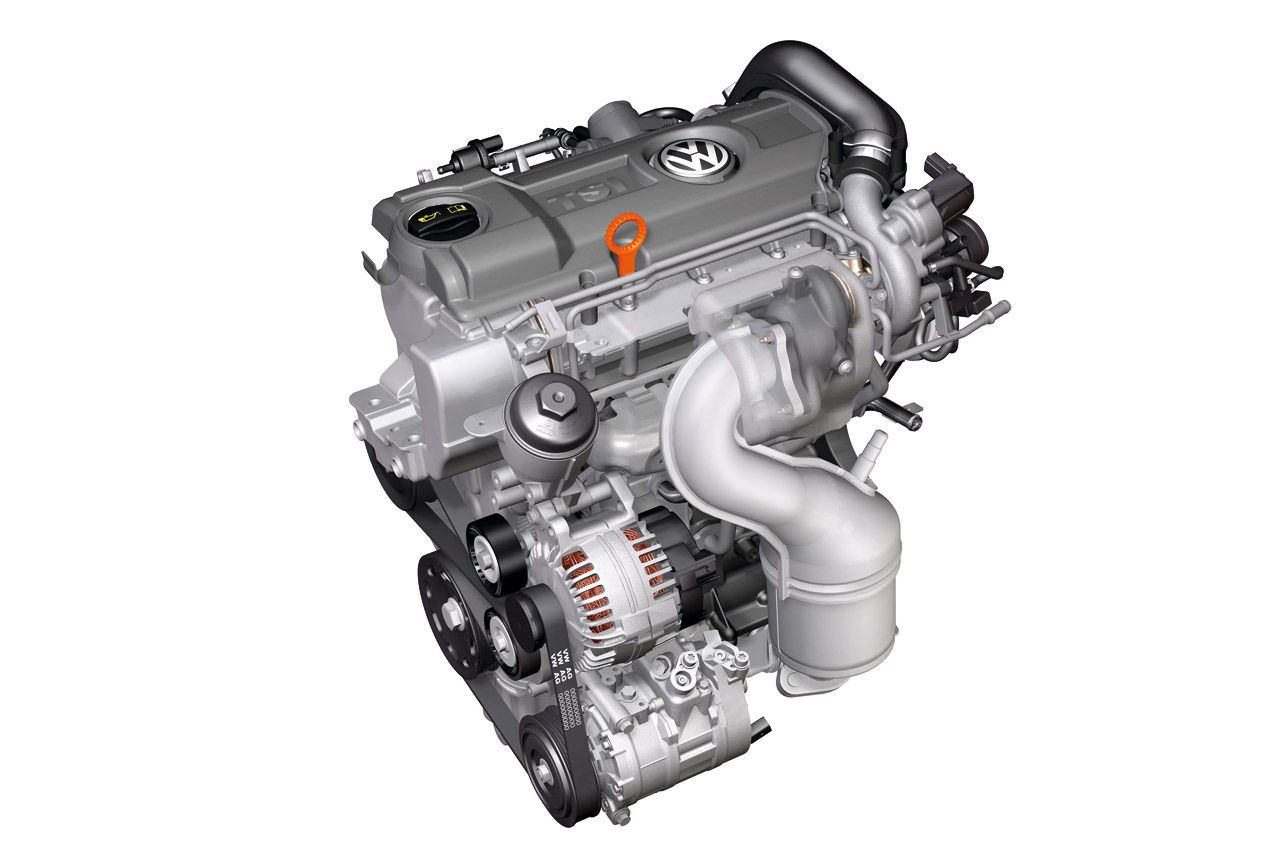 The 1.4-liter four-cylinder engine has been with VW for a very long time, but in 2005 at the Frankfurt Motor Show they put a performance spin by unveiling the Twincharger version. Based on the EA111 that has been around since the original VW Polo and the Audi 50, the new engine used a turbocharger and a supercharger to offer 170 PS, replacing the 2.0 FSI naturally aspirated unit. At engine speeds just above idle, the belt-driven supercharger provides a boost pressure until the engine reaches 3,500rpm.

Just like the EA211 1.4 FSI, the TSI engine displaces 1,390cc with a bore of 76.5mm and a stroke of 75.6mm. It’s been offered on the Golf since 2005, as well as a number of compact cars from the VW Group. Engine outputs vary from 122 hp all the way to 180 hp offered on performance models like the SEAT Ibiza Cupra, Polo GTI and Fabia RS. The newly developed generation of the 1.4 TSI is built under the code name EA211. It produces 140 hp using a single turbo, has the latest TSI Green tech and offers Cylinder On Demand. 1.8 TSI/TFSI
The newer EA888 family of four-cylinder 1.8-liter turbo engines was designed and developed by Audi’s engineers for optimum performance and efficiency. Like the EA113 generation of engines they replaced, they use iron because this has better acoustic damping properties compared to aluminum. Expected to be universally available for all markets on five continents, the 1.8 TSI is widely believed to be the ideal solution for the US market’s aging 2.5-liter five-cylinder units.

The EA113 generation of 1.8 TSI are still in production alongside the EA888. Commonalities are limited to FSI direct injection, cooling systems and spacing between the cylinders.