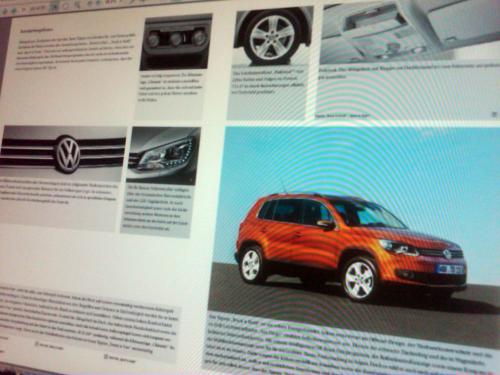 The contemporary automotive world has many information leakage pathaways that allows the public to enjoy details of new cars before these are officially released. The latest car to be taken on one of these routes is the Volkswagen Tiguan facelift, with a scan of the vehicle’s brochure, showing the exterior of the vehicle, as well as a few interior elements, having leaked on the worldcarfans website.

The revised Tiguan will wear the new VW family suit, which was introduced on the sixth generation of the Golf and is now present on many of the German automotive producer’s models.

The compact SUV will use redesigned headlights, which will incorporate LED daytime running lights, as well as a new front grille that will come with three chromed horizontal bars.

The vehicle will also feature a revised front bumper, which inludes new fog ligts. In addition to that, the German SUV will get a new rim design, which will join a wide range of wheel options.

The car’s interior will also be touched by the upcoming facelift, with the Tiguan receiving a revised center console and a fresh console above the interior rear view mirror.

The Volkswagen Tiguan’s facelift isn’t expected to bring changes under the SUV’s hood, with the vehicle expected to keep its current engine line-up. This includes two diesel units and three petrol powerplants. The entry level diesel engine is a 2.0 liter TDI developing 140 hp, followed by the 170 hp version of the same engine. The gasoline engine range starts with a 1.4 liter TSI developing 150 hp. The next engine is a 170 hp 2.0 TSI, with the range being topped by a 200 hp version of the 2.0 TSI.