2 Volkswagen T-Roc 1.6 TDI With 115 HP Launched in Britain and Its WLTP-Tested

Mihnea Radu
As testing for the T-Roc R intensifies, we were able to add our first spy video to the growing gallery of images. So here is your first taste of VW's first hot hatch crossover.
1 photo
The T-Roc R is not the first "SUV" to wear the R badge. And no, we aren't talking about the Tiguan R that also underwent Nurburgring testing this year. That honor belongs to the Touareg R50, about a decade old and powered by a freaking V10 diesel.

Compared to that, the T-Roc's engine seems small. The R model is guaranteed to have a 2.0-liter turbo. But while the output isn't known at this moment, we believe it's in the 280 to 306 HP area, almost matching the 313 HP of the R50.

Being derived from the MQB platform, this crossover can easily combine the turbo grunt with a 7-speed DSG gearbox and 4Motion all-wheel drive. Changing gears in a car like this seems tedious, but a manual might still be available. This prototype might even have it, judging from the way it downshifts and holds revs. We still remember how SEAT used manual cars for all its Cupra records because the stick shift is lighter.

Compared to the regular T-Roc, the R will have larger brakes, bigger wheels, wider tires and stiffer suspension. Its body kit will also change, and we're fans of the new front end with intakes instead of those pointless LED lights. Around the back, we hear the familiar quad exhaust system, making the same sounds as on the Golf R.

While undeniably hitting a new and exciting market, we have the feeling the T-Roc will be one of the least loved R models. From our understanding, VW is preparing a Tiguan R with the 2.5 TFSI, an Arteon R with a V6 and the Touareg R with the 4.0 TDI. Still, 300 horsepower in such a small vehicle is pretty special. 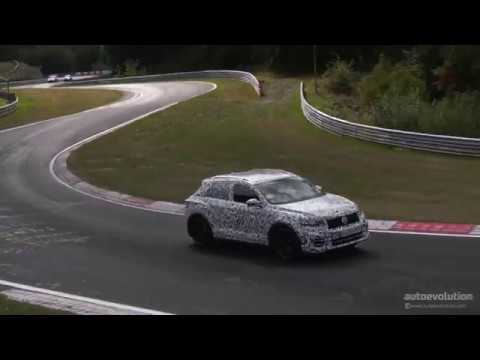