2 Rivian R1T Ends Up With a Broken Accelerator Pedal: Is It an Isolated Case?

Volkswagen electric vehicles have been plagued with software problems from the very beginning. Even after years of sales, the progress seems only minimal. This is why Alex Guberman, an ID.4 owner and a huge fan of the model, wants now to get rid of his car after one year and a half of ownership.

For a couple of years, many people expected legacy carmakers would blow Tesla out of the water with the much better build quality. Instead, they got bogged down with software problems, showing that a modern vehicle is more than just the sum of its parts. Volkswagen is probably the best example, seeing how Cariad, its software arm, has single-handedly managed to derail the new car programs for all Volkswagen brands.

Volkswagen owners of an ID electric vehicle have been complaining for quite some time of software issues. The first model on the new MEB platform, ID.3, had to be delayed half a year because of software problems. Even when it shipped, it lacked software features, with Volkswagen promising to offer them via a software update later. Two years down the road, Volkswagen didn’t solve many of the issues customers complained about, which is also true for ID.4.

Alex Guberman, the host of the YouTube channel E for Electric, was one of the first owners of the Volkswagen ID.4 in the U.S. He loved the car when he got it and quickly became a huge fan. But, after one year and a half, the honeymoon is over, and he can no longer tolerate the many software bugs and command failures that plagued his ID.4. This is even more painful for him because Volkswagen hasn’t issued a single over-the-air update since he’s had the car to fix any of the problems he’s been complaining about.

Now, don’t think that Guberman was won by the dark side. He complained about the issues to Volkswagen of America before. The company even set up a meeting with a software expert in Germany a year ago. At the time, the expert blamed Google for most of the issues, an answer that didn’t convince Guberman. Now, he’s had enough and confesses on video that his continued problems are enough to make him want to push his car off a cliff.

Among the most annoying issues is the tire pressure monitor system giving false low-pressure warnings and failing to display the actual tire pressure, and the fact that the charging connector doesn’t release as it should upon unlocking the doors. There are also many glitches with the infotainment system, which takes a lot of time to boot up, and sometimes it shuts off and reboots randomly.

Using the Volkswagen companion app is also disconcerting, constantly throwing error messages and taking a long time to respond to a command. Alex Guberman complains that he sometimes sends the command to start the air conditioning, and it still hasn’t turned on when he arrives at the car. Before publishing the new video explaining all his issues with his once beloved car, Guberman contacted Volkswagen again. He even invited someone from the company to talk about the problems, but Volkswagen allegedly declined.

Alex Guberman posted a poll in his Facebook group “VW ID.4 Owners Club,” which showed that 42% of people taking the poll had encountered software issues. Remarkably 32% say they haven’t had any problems with their cars. Regarding software updates, 86% of the owners in the club said they never got a software update, either over the air or at a service center. We want to learn more about your experience with Volkswagen’s electric vehicles. If you own one, please share your thoughts in the comment section below. 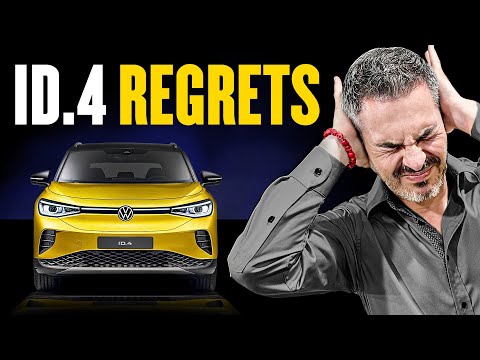