1 Volkswagen ID.5 "Coupe" Spied at the Nurburgring, Looks Like a Stocky Model Y

4 This Is How the Volkswagen ID.4, the First MEB Crossover, Is Made

5 Skoda Enyaq iV Officially Revealed, Looks Like Europe's Next Car of the Year
Car video reviews:
Up Next

Everybody talks about how Volkswagen wants to make more EVs than Tesla. But there's a major hurdle in the way. The Nissan Leaf is arguably the most successful EV in Europe and it stands in the way of the ID.3.
1 photo
America probably isn't going to get the Volkswagen ID.3, but it's a pretty simple car to understand. The all-electric hatchback is the first vehicle ever developed using the MEB platform. It's about the size of a VW Golf, but the layout is different, more futuristic, some might say.

This review from British magazine Autocar is one of the first to look at the ID.3 in the context of the general EV market by pitting it against the Nissan Leaf. This video might be especially important for people who have bought a Leaf in the past decade and are looking for a German upgrade.

As far as the looks are concerned, they're both compact hatchbacks yet have little in common. The Leaf is angular, but also pretty familiar, while the ID.3 is smooth with a few intelligently placed creases. It reminds us of the iPad Pro in that regard.

The interiors are also strikingly different, with the ID.3 appearing more modern. This is because Volkswagen plans to make many more EVs on this platform, while the Leaf is an only child. But, the minimalist, all-screen setup of the German car might also be off-putting for older customers.

In terms of specs, the top-of-the-range Leaf comes with a 62 kWh battery that gives it an official range of 239 miles (385 km) WLTP. Meanwhile, the ID.3's current battery packs the same amount of juice (but only 58 kWh are usable) while the total range is rated at 260 miles, 21 more than the Leaf. Both cars also have the same peak 100 kW charging power at the moment.

According to Autocar, the ID.3 has many niggling issues, from a firm ride to an aggressive lane keep assist. The Leaf rides more smoothly but doesn't grab your attention in the same way. In short, the Leaf obstacle is still in the way of VW's success. 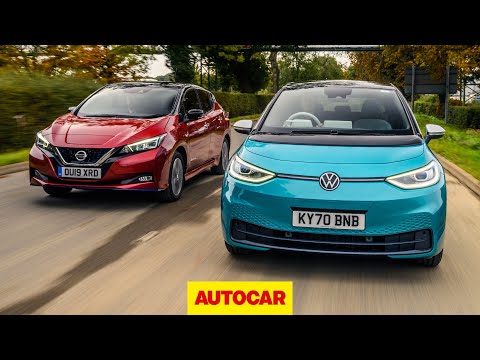