3 Installing a Short Shifter Is Definitely Worth It, VW Golf R Owner Finds

5 Tuned Volkswagen Golf R Goes for Its Top Speed With 450 HP Under Its Hood
Car video reviews:
Up Next

Valentino Rossi Gets His Name on a Plane as a Homage, Other Champions Also Honored

Volkswagen Golf R Faces Toyota GR Yaris on the Track, It's Tighter Than You Think

Usually, the Toyota GR Yaris and the Volkswagen Golf R are not seen as competitors, especially since they are in different segments of the market. However, they can be close from a financial perspective in certain conditions, and they both offer the tried-and-true recipe of an all-wheel-drive, turbocharged, hatchback. Until the GR Corolla reaches the market, that is.
7 photos

Now, this is the kind of race that one might expect to have a clear winner, and it begins as if there can be only one. Things change rather quickly, as Marty and Moog have a bit of a track battle between them.

The two friends have been hosting their show, Mighty Car Mods, for fourteen years now, and they have eliminated the usual excuses regarding poor performance on the track.

The latest Golf R, based on the Mk8 Golf, comes with a new software for its stability control system, as well as changes for its rear differential, which means that the German hatchback has a bit of a drift mode built into it.

Meanwhile, its smaller buddy on the track, the GR Yaris, also comes with a smart all-wheel-drive system, and it has an incredibly high horsepower figure for such a small motor.

The Japanese hot hatch can offer several torque split scenarios for its driver, which means that it can also drift if someone wants to do so with it and has a bit of skill to go along.

We are not going to ruin the video for you, as these will be ten interesting minutes that might help you make a decision if you happen to be looking for a hot hatch but are unsure what might best suit your taste in cars. 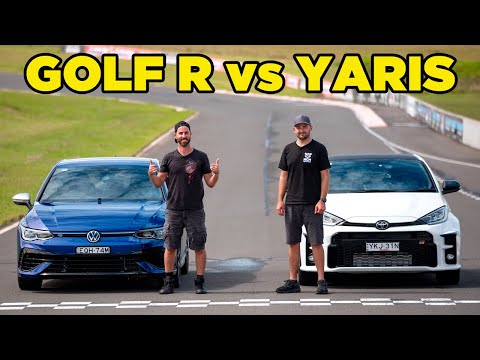