1 Honda Civic Drag Races Volkswagen Golf, Which One Would You Bet On?

The Volkswagen Golf R is quickly building quite a reputation for itself and given the kind of performance it shows on the track, the German hot hatch seems to be worthy of every bit of it.
33 photos

The Golf R is the best performance-oriented hatchback you can buy right now without spending the ridiculous amount of money something like the Mercedes-AMG A 45 S commands. The R itself won't exactly be cheap, but for just under $45,000 (the starting price for the DSG version in the U.S.), you'll get a decent amount of technology bundled as well as sports car-rivaling performance.

Well, despite Volkswagen doing its best to make the R stand out, we still don't feel as though its appearance fully reflects the vehicle's capabilities. It's still quite tame. Compare it to the AMG A 45 S we mentioned before, and you'd be forgiven if you found it difficult to call both of them hot hatches for the simple reason one looks much sportier than the other.

Well, the usual solution to this problem is to add more aggressive aerodynamic body parts such as a bigger wing, larger air intakes, a pointier front splitter, and so on. However, there is also a much more complicated and less likely route to making the Golf R seem sportier, which is to turn it into a sleek, almost supercar-like coupe.

The mastermind behind this transformation is The Sketch Monkey, the stage name of digital artist Marouane Bembli. He figured a successor to Volkswagen's W12 Coupe concept from the late '90s is long overdue and identified the Golf R as the perfect platform on which to build one.

However, it could very well be that the only support provided by Volkswagen's hottest hatch is the visual one because Marouane mentions something about an all-electric powertrain for his creation. Considering he only marginally lowered the front end, we see no reason why the two-liter turbocharged engine of the R couldn't still fit there.

There might even be room for an extra turbocharger, just to make things more interesting and give the coupe a bit more bite. With the all-wheel-drive system a given regardless of where the power comes from, the VW would undoubtedly prove to be quite the beast in a quarter mile drag race.

The only thing we're not sure about is the golden wheels. It's not so much the color that's bugging us (after all, the Subaru Impreza WRX STI made this blue and gold color combination a classic) as is the style. It feels as though the design is a bit too conservative compared to the rest of the vehicle, and a cleaner appearance with less intricate shapes would have offered a better match. Well, let Volkswagen build this thing first, and we'll gladly buy a new set of wheels for it. 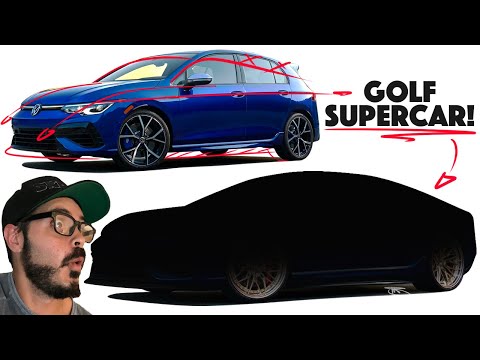