3 Passat BlueMotion 2 Heading to Dealers
Car video reviews:
Up Next 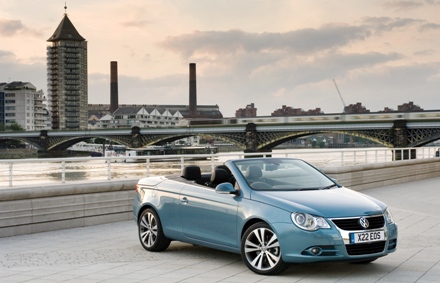 Volkswagen unveiled a brand new entry-level model of the Eos series which, in contrast to the initial base model, is cheaper by more than 500 pounds. The German car manufacturer says that the new entry-level Eos will be referred to as “S” while the previous base variant will be upgraded to “SE” and will provide a couple of new features.

The Eos S now costs 19,440 pounds and is powered by a 1.4-liter TSI engine with a maximum output of 122 PS combined with a six-speed manual transmission. Features are basically the same as on the previous model, with ABS, ESP, semi-automatic air conditioning, 16-inch alloy wheels and remote control central locking with alarm available as standard.

The newly-upgraded SE version is priced at 20,530 pounds and comes with a wide range of standard features, including a multifunction computer, rear parking sensors, 17-inch allow wheels and front center armrest. Beside all of these, the SE also received a luxury pack, with “Follow me home” technology, rain and dusk sensors plus electrically foldable door mirrors included in the package. All these features raised the price of the basic model by 735 pounds, Volkswagen said in a press statement, but the Sport and the Individual variants have also been upgraded.

While the Sport now comes with 18-inch alloy wheels and the aforementioned luxury pack, the Individual only includes the luxury items which increased its price by 275 pounds.

The German car manufacturer says Eos recorded remarkable success in the United Kingdom, with more than 12,800 units sold since its official launch date in July 2006. Have a look at the second picture for more details on the new Volkswagen Eos lineup pricing.