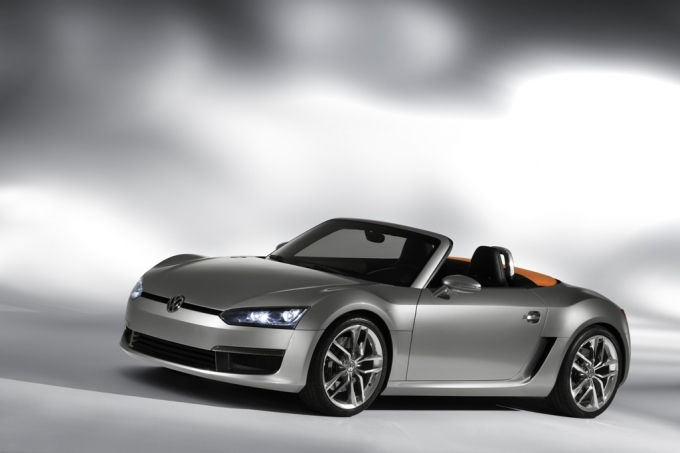 Presented for the first time at the 2009 North American International Auto Show, the Volkswagen BlueSport roadster is close to becoming a mass-produced model, according to a report by AutoExpress citing sources close to the German carmaker. However, the car won't be seen on public streets sooner than 2013, with pricing likely to start at around $30,000.

The aforementioned source is reporting that the production BlueSport will employ a mid-engine architecture, which would lead to increased storage spaces at both the front and the rear. Volkswagen is considering using an aluminum chassis for improving performance and cutting emissions, as well as a manually-operated canvas folding roof. Preliminary figures are indicating a total weight of around 1,200 kilos.

Power will be supplied by a 2.0-liter diesel engine, plus a 1.4-liter TFSI and a 2.0-liter turbo borrowed from Polo GTI and Golf GTI, respectively. The engines will be mated to a six-speed manual transmission but, as always, Volkswagen's popular DSG will also be available.

The 2.0-liter diesel configuration is expected to be fitted with regenerative braking and stop-start systems, both of them contributing to an average fuel consumption rating of 45 mpg (5.2 l/100km).

At the time of the NAIAS display, the concept came with two engine configurations, TDI or TSI, both of them capable of providing high power while remaining focused on fuel economy and CO2 emissions. The United States models were believed to be powered by a 2.0-liter unit that produces as much as 132 kW (180 PS) and 350 Nm of torque. The 0 to 100 km/h acceleration is done in 6.6 seconds, with a top speed of 140 mph (226 km/h).