1 Volkswagen to Enter WRC?
Car video reviews:
Up Next

GM CEO: We Are Days Away from Selling Hummer 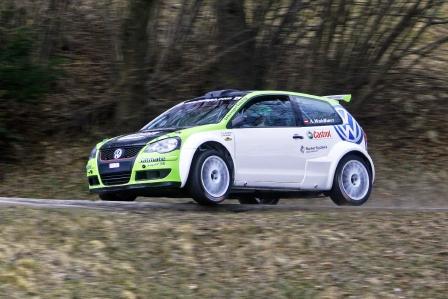 Volkswagen have officially announced they will return to the Intercontinental Rally Challenge in 2009. The German manufacturer will field a single Volkswagen Polo Super 2000 car – for France's promising Julien Maurin – in 6 of the following IRC rounds this year.

“I am happy to confirm that Volkswagen will return to the IRC with the young French driver Julien Maurin,” said the boss of Rene Georges Rally Sport team, Jack de Keizjer. Maurin's entry will be sponsored by YACCO France.

Maurin is yet to test his new car on gravel, before finally debuting the Polo in an official IRC event, the Sata Rally Azores on May 7 thru 9. Volkswagen did not mention whether Maurin will be joined by another driver in any of the 6 events on schedule – Azores, Belgium (Ypres), Madeira, Czech Republic (Barum), Spain (Astrurias) and Italy (Sanremo) – but it's believed Austrian driver Andreas Waldherr could team the Frenchman in one of the aforementioned rallies.

Maurin previously competed in the IRC on an Astra Racing-developed Fiat Grande Punto this year, but failed to complete Rally Monte Carlo due to a mechanical problem. He's now set to gravel-test the new Polo in France (somewhere this month) after previously running the car on asphalt, in Belgium.

The German manufacturer is yet to unveil whether they'll compete in next year's S2000-based World Rally Championship or stick to their Dakar Rally programme. Shortly after the end of this year's Dakar Rally, it was rumored Volkswagen was thinking to switch to the WRC in the wake of the cost-cutting policy adopted by the FIA for the 2010 season. In the meantime, however, they announced they will extend their Dakar programme for at least until 2010.