3 Volcon Introduces Runt, a Mini Companion e-Bike for the Grunt

Volcon Debuts Its Stag UTV, Touts It as the Most Cutting-Edge Off-Road Vehicle

Volcon has only been around for two years now but has already made the headlines a couple of times: first with its all-terrain electric motorcycle Grunt and then with its less powerful, kid-friendly sibling, the Runt. The former can hit 40 mph (64 kph) and offers ranges of up to 75 miles (120 km) per charge, thanks to its 2.0 kWh battery. Its smaller brother, Runt, offers 35 miles (56 km) per one battery charge, three riding modes and parental controls so that parents can always keep an eye on their little riders. There’s no info on the wheeler’s top speed.

With the new Stag, Volcon has stepped into four-wheeled territory, with the UTV being suitable for a wide range of riders from beginners and outdoor adventurers to hard-working professionals and powersports enthusiasts. The Stag packs a 107 kW motor that delivers up to 360 Nm of torque and can produce an output of more than 140 hp in its Overboost mode.

Volcon’s Stag comes with on-demand 4WD and when activated, the off-road capabilities of the UTV are enhanced and its stability increased. Tech-packed and designed so that you can share all the important moments as easy as possible, Stag comes with two built-in cameras and you can also add more cameras as accessories. There’s also onboard computing hardware to process video clips, a dedicated app, and a sim card based on the user’s cellular service plan and coverage.

Reservations for Volcon’s Stag UTV are now open, with the vehicle starting at $40,000. The UTV is expected to arrive in dealerships next summer. 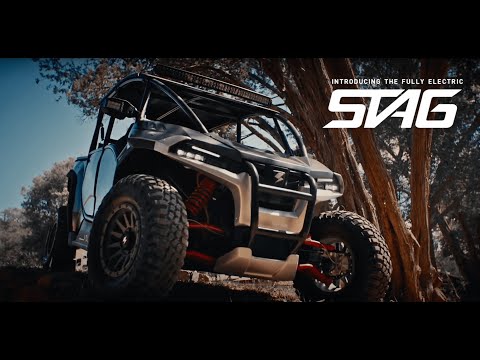