5 2024 Toyota Grand Highlander 7/8-Seat CUV Reveals Everything, Though Only in CGI
Coverstory

Home > News > Renderings
Aurel Niculescu
As far as Japanese automakers' presence in the United States of America is concerned, few will dare to contest that 2022 was Honda’s breakout year. So, how about 2023, will it be Toyota’s turn?
8 photos

Honda took the U.S. auto market by storm last year, complete with an all-new HR-V (now larger and internationally sold as the first-ever ZR-V), the latest generation of the best-selling CR-V, the feisty Civic Type R, and mid-size (eleventh) Accord, as well as the family-oriented yet adventurous three-row Pilot TraiSport mid-size crossover SUV.

Toyota could not stand by and let them take all the laurels, right? As such, we are going to notice some cool introductions this year, such as the upcoming Corolla Cross Hybrid (which is said to replace the subcompact C-HR), the Trailhunter measured response to Honda’s TrailSport series, as well as the 2023 Prius Prime ‘Hybrid Reborn’ plug-in hybrid. And these are only the official announcements.

Then there are also the teased reveals – such as the upcoming, first-ever 2024 Toyota Grand Highlander Hybrid Max Platinum 6/7/8-seat crossover SUV or the potential introductions of an entire roster of legends. Looking at the U.S. lineup, some of the coolest yet oldest SUVs and trucks are the 4Runner and Tacoma. The latter was last treated to an all-new generation back in 2015 (N300), while the former is even more ancient, given that its N280 fifth iteration arrived back in 2009!

As such, it is only natural fans are eagerly expecting Toyota to drop fresh (best-selling) Tacoma and 4Runner models their way. And that impatience represents major appeal and cannon fodder for the imaginative realm of virtual automotive artists, as well. So, here is Dimas Ramadhan, the digital car content creator behind the Digimods DESIGN channel on YouTube, who has taken up the monumental task of revealing the 2024-2025 4Runner - in CGI.

Well, fans of his pixel mastery know very well this desire is not at all surprising. After all, the author has been revolving around these rugged Toyotas for enough time to imagine a next-gen 2025 Tacoma that was both rugged and disconcerting, a 2025 Hilux TRD Pro looking a lot fresher than its American counterpart, and even an all-new 2024 Fortuner that sprung to life as the cool Hilux SUV sibling. Now, as logic bids, it is the ripe time to bear witness to the CGI vision of a 2024 or 2025 Toyota 4Runner.

As always, the informal presentation starts with a quick comparison between the current, real-world 4Runner and the ‘new’ CGI version followed by traditional front- and rear-three-quarter POVs. This makes it easier for anyone to check out these digital goodies, and this SUV gives us the impression of a streamlined yet still rugged next-gen transformation. Of course, that may all be attributable to the virtual flagship TRD Pro treatment, right? 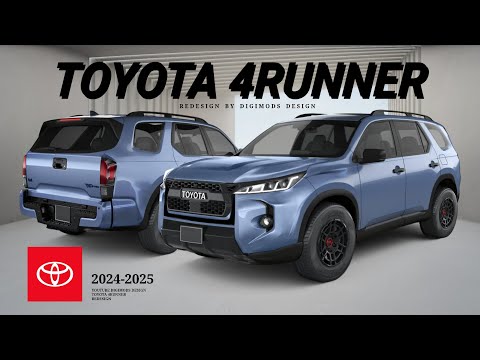