4 What If... Mazda Turned the MX-5 Miata Into a Sporty Electric Crossover?

5 Project Airbender Has the Perfect Classic Villain Hot Rod Look, Even if Only in CGI
Car video reviews:
Up Next

Not long ago, Polestar was just another all-new brand in Chinese conglomerate Geely’s humongous (and still growing) roster. But now, it needs to be taken more (than EV) seriously.
16 photos

Dreamt as the sustainable performance counterpart of Volvo, Polestar is today the biggest EV maker that has gone public through a SPAC procedure, and also the harbinger of interesting things to come via its Polestar 1 and 2 machines. And while the first was just a hero to signal its high-performance fortunes, the second is the run-of-the-mill cash bread and butter.

The Polestar 2 will soon be followed by 3,4, and 5 siblings (the latter has already made a soft debut as an 871-hp dual-motor development prototype that visited Goodwood Fos). But it may be argued that the battery-electric five-door liftback has more to offer, still. Such as the option to include a new body version that would put it above its direct competition, for example, even if only virtually.

So, the virtual artist better known as SRK Designs on social media has decided to play with the perspective of little Polestar taking the fight to the big leagues and cooked up a digital Polestar 2 estate that sure feels like the EV Shooting Brake we deserve – but major zero-emissions players like Tesla refuse to give us. Well, that’s history, at least across the digital realm.

The pixel master’s Polestar 2 station wagon comes to virtual life in the CGI expert’s latest behind-the-scenes making-of video (embedded below), and it naturally changes only the design for the rear quarters. The unofficial result is now a little tougher than the original but keeps the stylish Scandinavian design alive, nevertheless. So, do you think that “this should be built” or is Tesla right in not deriving their best-selling Model 3 sedan into a posh estate because station wagons are an (almost) extinct breed? 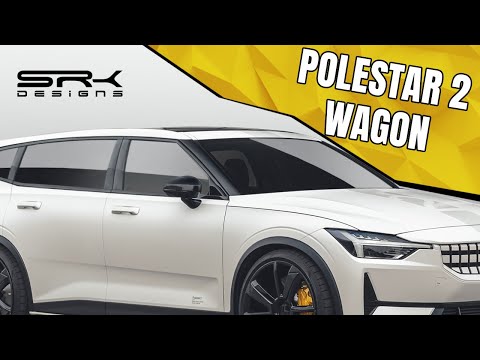