3 From Milan to Malpensa in 10 Minutes, Traveling at Speeds of 745 Miles per Hour

Virgin Hyperloop Explains How It Will Transport People at 670 MPH

Elena Gorgan
If Virgin Hyperloop has any say in the how the future of public transport will be like, it will be a very efficient, highly luxurious and safe experience. Fast, too, because the pods will zap people from destination to destination at speeds of 670 mph (1,078 kph).
30 photos

Virgin Hyperloop has been working on the magnetically levitating train for a some time, and the latest timeline has it that it could go into circulation as early as 2027, if everything goes according to plan. When that happens, the future of public transport will be revolutionized for the first time in over 100 years, with a new type of train that will considerably diminish travel time and improve on almost every other aspect of public transport.

The video at the bottom of the page is the latest from the Los Angeles-based company, and its obvious goal is to show how the Hyperloop works, as well as what advantages it has. The Hyperloop is a magnetically levitating pod that moves across airless tubes at incredible speeds. If you wish to put an exact number on it, make that 670 mph or 1,078 kph, but the ride will be smooth, comfortable and safe because there is no drag (since there’s no air in the tunnel).

The video shows a good look at the commercial system architecture, as well as the interior of the pod, its propulsion system and the batteries. It also explains the added value of traveling by Hyperloop, from the fact that pods could move around in convoy, would not need to stop at all stations, and would offer a seamless, modern experience. It would also travel with zero emissions and zero noise, and because of its speed, be able to move hundreds of thousands of people in one hour, in one single direction.

This isn’t the first time Virgin Hyperloop shows off the interior of the pod, but it is the first when it shows the battery pack.

In November last year, the company was able to complete the first passenger test for its XP-2 pod, also known as Pegasus, validating the theory of traveling through the airless tunnel and faster speeds. That said, Pegasus didn’t even come close to what the final pod will (hopefully) deliver in terms of performance: it only crossed 500 meters (1,640 feet) of tunnel, reaching a maximum speed of 100 mph (161 kph). 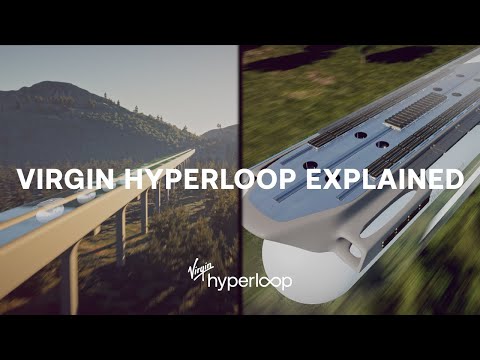 Editor's note: Gallery photos also show the Pegasus pod, which has actually been tested with passengers.