1 Steve McQueen's Harleys Will Be Auctioned

3 Early American Motorcycles to Be Auctioned

5 'The Long, The Short and The Tall’ Motorcycles Up for Auction
Car video reviews:
Up Next

Vintage Indian and Excelsior Motorcycles Up for Grabs 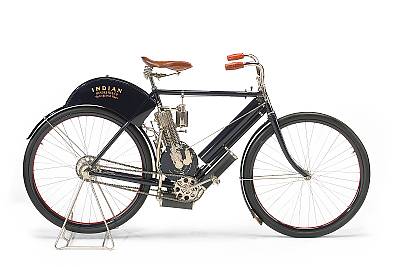 The North American division of Bonhams recently announced the addition of several important motorcycles from two renowned collections to their inaugural motorcycle sale in Las Vegas on January 6, 2011. The first ever Las Vegas Motorcycle Sale hosted by Bonhams will therefore feature over 200 rare motorcycles.

First, from a famous Texas-based collection best known for its numerous and exquisite automobiles come several motorcycles, including a 1935 Rudge 250 Sport, a 1952 Triumph Thunderbird 650, and a 1957 Moto Parilla175 MSDS.

Of significant note, however, are two tremendous examples of early American motorcycles, both formerly owned by Otis Chandler - a rare 1911 Curtiss Marvel Single 500 and the first year production 1901 Indian F-Head "Camel Back."

Then, from the collection of another Gulf State-based aficionado come 23 motorcycles of diverse makes and models. Included are two motorcycles from legendary maker Vincent - a 1939 HRD Meteor and a 1952 Black Knight Special with sidecar - and the incredibly rare, show-stealing 1916 Excelsior "Big Valve" Factory Board Track Racer in original paint condition.

“Both collectors are known for their tasteful and diverse interests in motor vehicles and, most importantly, for their demand for quality. As such, the models offered from these collections can be regarded as some of the best examples in existence,” a statement from Bonhams reads.

Additionally, all the proceeds from the latter collection will be donated to a designated non-profit organization.

Aside from the Excelsior, Indian and Curtiss mentioned above, the ultimate attraction of this inaugural Bonhams auction will be represented by a complete and authentic circa 1894 Hildebrand & Wolfmuller machine.

The lot index of the upcoming sale can be found in the document attached below (PDF file).